If You Want Great Mystery Reading, Don’t Miss This One!!!

I’m going to reprint here my introduction to the Past Crime’s Bundle on this last day. I was amazingly honored to be able to put this together and work with these other fantastic mystery writers. But all good things come to an end, and this bundle and the deal to get the ten books will end on Thursday evening.

So don’t miss it.  Just one day left!!  Go to www.Storybundle.com/crime

So below is my blog/introduction to the StoryBundle that I think describes it pretty well.

It Came Together This Way

The past often brings out the best in crime.

In fact, for a vast majority of crime fiction (mystery), the crime has already happened in the past and solving what happened, or who did it, or why the crime happened is the fun of it all.

I personally love past crimes of another category: cold cases. When the question of who done it or why in the normal crime stories doesn’t get answered in any satisfying way, the crime becomes a cold case.

And the passing of time makes it harder and harder to solve that dormant case.

Cold cases are my personal favorite past crimes, and I have an entire series of novels and stories featuring retired Las Vegas detectives solving cold cases. I have a book from that series in this bundle that I will mention later on. But that series, and my passion for crime and mystery stories, got me excited when I got the chance to put together this fantastic bundle called Past Crimes.

But no way did I want to have just cold cases, although I bet that would be a fun StoryBundle down the road. No, I wanted first of all, great crime stories, and second, great writing from top mystery and crime writers.

Wow, did we all get lucky because I managed to find all that.

First off, in my opinion, the greatest living mystery writer working today said he would love to take part. Mystery Writers of America Grand Master Lawrence Block. He has won more awards for his fiction than anyone in the mystery field and his newest book, The Burglar Who Met Fredric Brown is just fantastic! I have been lucky enough to read an advanced copy and you can get it on preorder right now. Trust me, you won’t be sorry.

Lawrence Block, when I suggested a past crime story, took it one step farther. He not only gave us a great crime story called Lucky At Cards, but it is also out of his own past as one of his earliest crime novels, first published under a pen name. Wow, what fun!

Next up, I talked New York Times and USA Today bestselling writer, Kristine Kathryn Rusch (my wife), into giving us a Smokey Dalton novel. Smoke-Filled Rooms is set in Chicago in 1968. The definition of a past crime story there.

She writes the Dalton books under the pen name Kris Nelscott. Kris is an Edgar Award finalist under both the Nelscott name and the Rusch name.

Entertainment Weekly says her equals are Walter Mosley and Raymond Chandler. Booklist calls the Smokey Dalton books “a high-class crime series” and Salon says “Kris Nelscott can lay claim to the strongest series of detective novels now being written by an American author.”

Or as the Chicago Tribune said, “This is mystery fiction at its highest, most gripping level.” I can only agree.

Next up, New York Times bestselling thriller and mystery writer, Rebecca Cantrell agreed to join the fun. She has won the ITW Thriller, Bruce Alexander and Macavity awards, and been nominated for a ton of others.

I also am pleased that New York Times and USA Today bestselling writer Vincent Zandri said yes to joining this Past Crimes Storybundle. Vincent has won the PWA Shamus Award and the ITW Thriller Award among others and has more than 70 novels in print.

The Shroud Key is a fast-paced, gripping Chase Baker novel that digs deep into not only a missing persons case, but maybe one of the greatest mysteries of all time. Heads-up, folks. This book is almost impossible to put down.

Award-winning and USA Today bestselling writer Robert Jeschonek brings his fantastic and unique way of looking at the world with a past mystery set in motion because Cary Beacon tries to rescue two endangered children.

As with almost all of Robert’s fiction, The Masked Family is very difficult to describe. Let me say that it involves Cary’s entire family, an arch-enemy thought to be long dead, and a horrid event in 1924 real life history. All tied together by Robert’s incredible and magical writing.

One of the true rising stars in mystery fiction, Melissa Yi, agreed to join this Past Crimes Storybundle as well with her novel Scorpion Scheme. This is a Hope Sze novel that finds Dr. Hope Sze investigating lots and lots of Egyptian lore and looking for lost treasure to pay off massive student loans. Seems like a great reason to me.

Melissa knows what she writes as she is also an emergency room doctor when she is not writing thrilling mystery short stories and novels.

New York Times and USA Today bestselling writer, Dean Wesley Smith (that’s me) is considered one of the most prolific working writers.

Okay, enough of that third person stuff. My bestselling mystery series, The Cold Poker Gang, follows a number of retired Las Vegas detectives solving really twisted cold cases. In Heads Up, two detectives end up in and under a shuttered old casino, following clues of an old and very twisted missing person’s case. And yes, there are numbers of shuttered casinos and hotels in Vegas. Great places to set past crimes.

As I was putting this all together, I knew I really wanted to showcase some shorter fiction as well from great mystery writers. The short fiction world in mystery is vibrant and active at this point. Also, that gives us all a lot more to read.

So after seven very different past crime novels, I asked acclaimed mystery writer David Hendrickson for a collection. He gave us Death in the Serengeti and other Stories: Ten Tales of Crime.

Dave’s short fiction has appeared in the Best American Mystery Stories, Ellery Queen’s Mystery Magazine, and other top markets. (In fact, I try to buy a short story from him for every issue of my magazine Pulphouse Fiction Magazine.) He is, as would be expected, a multi-finalist for the Derringer Award for best mystery short fiction and he won it in 2018. You will love these ten crime stories, I promise.

I next went to Leah Cutter who writes mysteries in a number of series, always to high acclaim. She is also the editor of the new quarterly magazine, Mystery, Crime, and Mayhem. In other words, she knows her short mystery fiction.

One of her mysteries series that really fits the past crimes topic of this Storybundle is her Rabbit series. In The Rabbit Mysteries, all the stories are set during the Tang dynasty in China. Okay, that’s really, really past crimes. I think you’ll love them.

And last, but not least, I got from WMG Publishing a volume of the acclaimed Fiction River series of anthologies. Award-winning editor Kristine Kathryn Rusch edited this volume titled Fiction River: Hidden in Crime. There are 18 fantastic crime stories in the volume by 18 different mystery writers. Great reading all the way through.

So I hope you all enjoy this StoryBundle as much as I did putting it together. Some of the best writers working in the mystery field have contributed to this bundle. Help us pass the word. 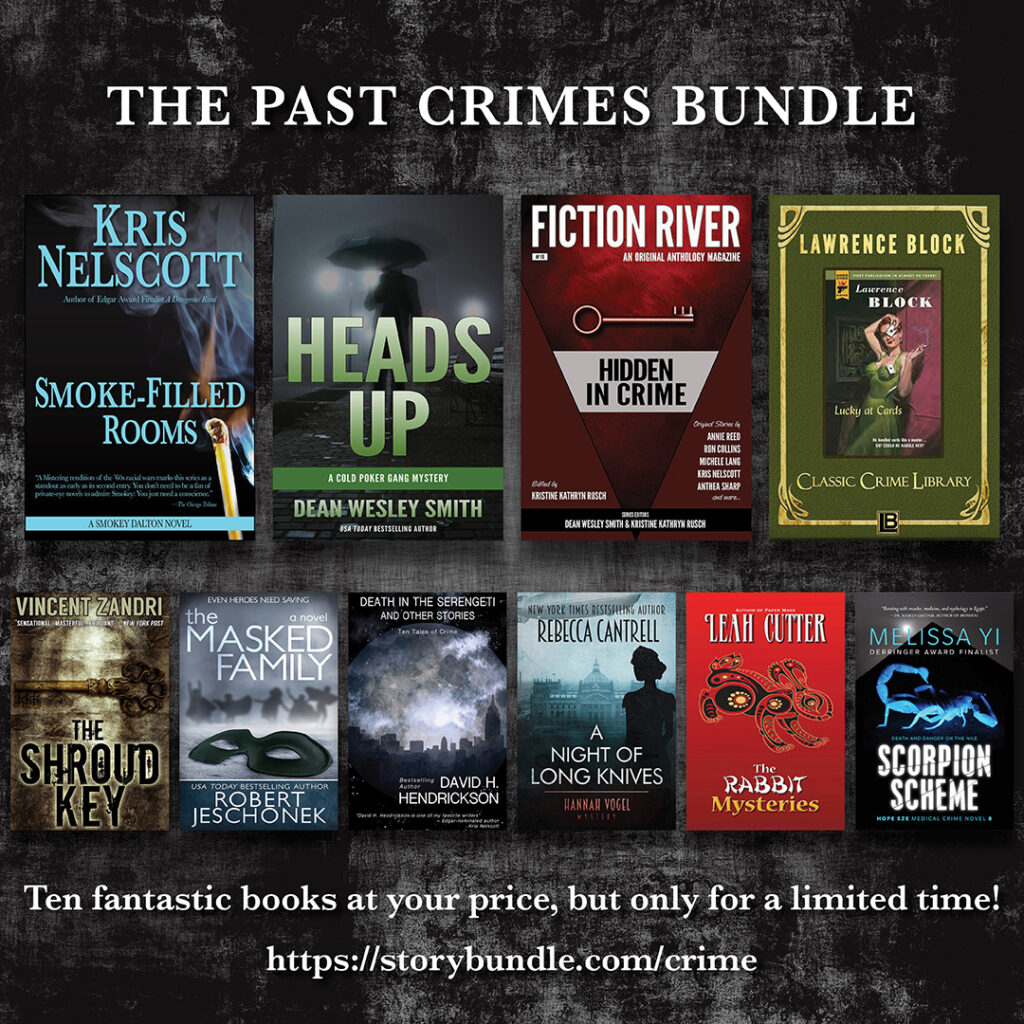