Great Books and Reading in This Bundle!

I curated a new Storybundle called VISIONS OF THE FUTURE. Some really, really fantastic science fiction from a lot of writers.

Since I sort of buried this the first time under talking about a ton of steps I did, here is my initial blog about the Storybundle. I am very excited about this one. Great writers, great stories.

VISIONS OF THE FUTURE BLOG…

For me, the future is a bright, hopeful place. That’s my nature. No matter how bad the news is at the moment, I tend to look at the future as a promise. Doesn’t mean the future won’t be full of problems. I am not that naïve, although sometimes my wife Kris thinks I am.

Maybe that is why I wrote so many Star Trek novels and edited Star Trek for ten years. I love the positive aspects of how Star Trek looks forward.

So I loved the idea of this StoryBundle called Visions of the Future. It is full of visions of a lot of different futures.

I wanted to find a number of professional writers who I knew could really give a clear vision, and a great story, of what they saw in the future. And I opened this up to see if top writers had a book that fit, and many did.

Professional fantasy and science fiction writer Lisa Silverthorne sent me not one, but two books in an omnibus edition titled True Purple. These are the first two books in a military and genetic-engineering world that has heart, as all of Lisa’s books do. If you love character-driven science fiction, you will love these two books.

Then USA Today bestselling writer Louisa Locke sent me a book from her multi-author world she founded called Paradisi Chronicles. Between Mountains and Sea is a stunning coming of age novel that different reviews have said reminds them of LeGuin, Butler, and McCaffrey. I can’t disagree at all. Amazing world and character not to be missed.

Next came a novel titled The Gaia Websters from professional writer Kim Antieau, who has been a professional writer and friend of mine for almost forty years. This is a novel where the future Kim sets up is after a collapse of society. The story is positive, upbeat, and challenging all at the same time. If you haven’t found Kim’s wonderful writing before, this would be a great book to start.

Next, professional writer Terry Hayman brings a sort-of modern day look in his book Jumpback. This book combines aspects of thriller fiction with science fiction concepts such as time travel. And ends up giving us a look forward at a somewhat frightening idea of “what if this was possible.”

Kari Kilgore gives us a really cool idea for the future. A certain element allows communication across the galaxy, but it can only be found in one place. And what happens because of that. Sort of a great metaphor for so many futures.

Barbara G. Tarn paints a picture of a massive galactic civilization that is very cool. And she does it through a space adventure and stolen manuscripts and old texts. As a person who loves old books, that really hit my tastes, let me tell you. Just a wonderful look at a far, far distant future.

Bestselling writer Maggie Lynch asks the question, “What happens if humans could live 800 years? Would that be a great thing or a bad thing? Only Maggie could paint that future in a way that is impossible to put down as you read.

New York Times bestselling writer Kristine Kathryn Rusch offers up a vision of the future from her major science fiction Retrieval Artist series. Domes on the moon, alien laws and the repercussions of alien laws. An amazing vision of the future where humans have expanded out into a galaxy full of aliens with very different rules.

I added a book from my Seeder’s Series. This book gives a glimpse of a far, far advanced civilization from the point of view of those who seed humans throughout many galaxies. They can travel from one galaxy to the next in minutes. And while seeding humans over such vast distances, they often lost in the process and need to be rescued. I love this future. Sort of advanced Star Trek.

And last, but not least, the ultimate in a look at the future. An entire volume of the award-winning yearly anthology Writers of the Future. This has three bonus stories plus 14 winning stories by some of the best new writers working in science fiction. These stories are picked every year by some of the top science fiction writers in the world.

The three bonus stories that show very different futures in the volume are:

“The Dangerous Dimension” by L. Ron Hubbard: Meek Dr. Henry Mudge has a dramatic personality change after discovering a mathematical equation that transports him to any place in the universe he can think of.

“The Phoenixes’ War” by Jody Lynn Nye: When a lover’s gift to her king turns out to be a perilous trap, the Phoenixes and their priestess face a test that will decide the fate of two realms.

So ten novels of different visions of the future, including an anthology with 17 different stories in it. This is an exciting bundle. Don’t miss it, since it will only be around for a very short time. –

For StoryBundle, you decide what price you want to pay. For $5 (or more, if you’re feeling generous), you’ll get the basic bundle of four books in any ebook format—WORLDWIDE.

If you pay at least the bonus price of just $20, you get all four of the regular books, plus SIX more books for a total of 10!

This bundle is available only for a limited time at Storybundle called VISIONS OF THE FUTURE. 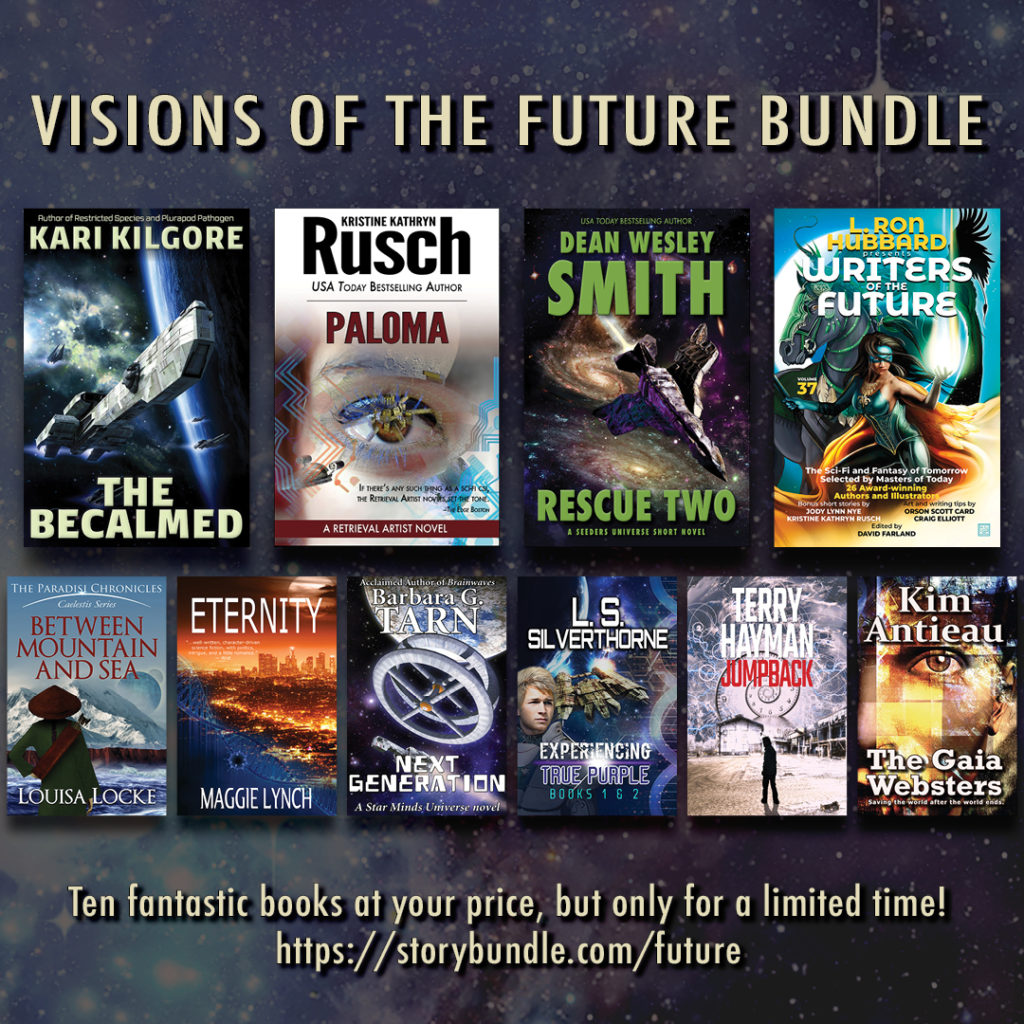