Had Ideas for a Blog Tonight…

I was going to do Chapter Four of Wet Blanket Reality, but then, to be honest, I didn’t feel like being that negative at the moment. I’m in a positive mood about the new year and the new challenges and doing the Motivational Mondays, so I don’t need to rain on someone’s parade at the moment. I will return to that book and finish it in January. Besides, no one who reads this blog regularly is actually thinking of going to what is left of the traditional publishing world. But I still want to finish the book because I have a Storybundle I want to put it in in April.

I was going to talk about all the new classes that will be added in very shortly in mass in the Master Business Class. About eight different ones in two different forms. All added at once, but then figured I would talk about them when they are actually available.

I was going to talk about my method of keeping track of my stories for this new challenge but decided I wanted to test drive that for a week or so before saying anything. See if the method will work and be valuable for 365 new stories.

And I thought I could talk about Smith’s Monthly for December which I am finalizing tonight, but those of you who are interested will see it anyway shortly. It is Issue #56.

So finally I just gave up and decided to do what any smart writer does when you really need something to talk about. Put up a cat picture. (see below)

The orange cat in this picture is Gavin, who actually grew into those ears and works here at Promotion Central helping Kris promote books. The other beautiful cat is Suzy. Suzy was a stray we rescued from a shelter and we have no idea how old she was. She was very unhappy living with our four other cats at the time. She needed to be a solo cat and our friend Dan Duval who is a great writer and runs a fantastic bookstore in Lincoln City had just lost his cat, so we gave her to him. Years passed and they were a fantastic couple until suddenly Dan had to move and the new place would not allow cats, so our friends Chris and Steve York offered to take her and she is doing great. Little Suzy is clearly a writer’s cat. She has lived at one point or another with five major professional fiction writers. 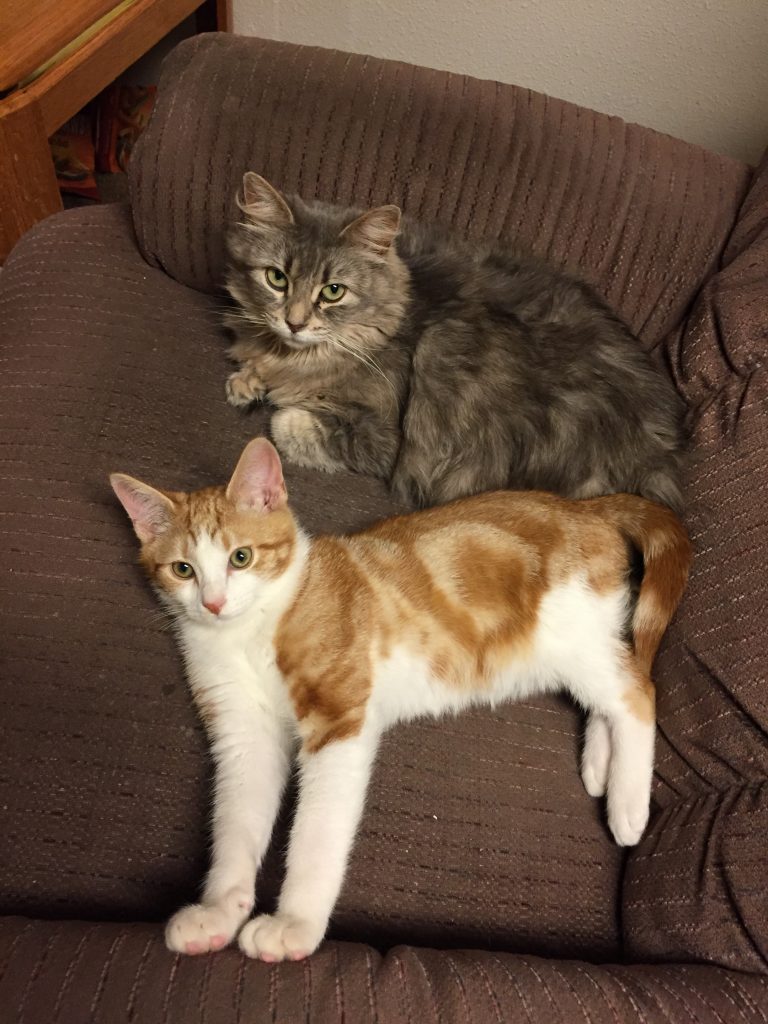