Not Sure Why Fridays Bother Me…

I imagine it is because of back in 1987 I was finishing up a 14 year run of tending bar. Fridays, Saturdays, holidays, I always worked until late. So on Fridays I was alway out with those partying in one way or another.

And then from 1987 until the late 1990s, I spent a massive number of weekends at science fiction, fantasy, and a few mystery conventions. In 1992 Kris and I went to 26 of them, one every other week. It was part of the business back then. We were both writers and Kris was the editor of the Magazine of Fanasy & Science Fiction and I was the editor of Pulphouse and the publisher. I was starting to sell a lot of novels at that point, and that’s where I made deals for books, plus talked with my writers for Pulphouse.

But for the last 20 years they have not been. In fact, I have no desire to go out anywhere with all the amateurs, and I don’t think I have had a drink in three or four years.

But for some reason to this day I am always slightly restless on Friday nights, and more often than not end up wasting the evening doing silly things.

Like tonight I spent at least two hours just looking up marbles, making sure I had some identifications down solid. The only real collection that I kept from the coast (besides all the digests which are now mostly in storage) was a massive marble collection. And I do mean massive. Well north of 300,000 marbles. I am not kidding.

Marbles are scary hard to identify. One marble could be worth nothing, and a marble that looks similar to it to an untrained eye can be worth a thousand dollars. And as with any collectable, condition, condition, condition is everything. Problem is with marbles, they are glass and have always been made for kids to play with. And glass marbles for fifty years were made by hand from the mid 1800s into 1910s or so, mostly in Germany. They are basically works of art, which is why I love them so much.

For example, here is a picture of some Latticino German handmade marbles from the 1800s. The picture is from BuyMarbles.com. 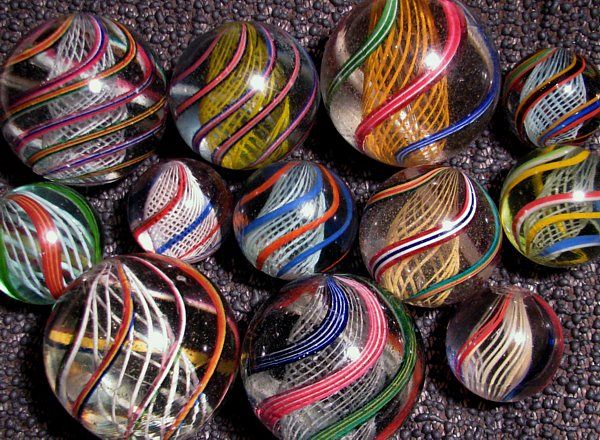 Realize these were made by hand and for children. And yes, I have all of these in one form or another and one size or another. Hundreds of them. The amazing thing is the colors, shapes, and sizes vary. Again, all made by hand.

These in the picture are not polished (polishing is a bad thing and can ruin a marble just as polishing a story can ruin a story) and more than likely in this condition (which is great) can run from $25 for the small ones up to $300 or more for the bigger ones. All at least 120 plus years old.

When Kris and I were here in Vegas about 25 years ago, we stopped at a really nasty little strip mall that had a second-hand store in it. Kris actually wanted to go in with me and she veered off to look at some books while I asked the guy behind the counter if he had any marbles. He said he had just gotten some and reached under the counter and pulled up an old leather marble bag from the 1920s and sort of banged it on the counter. I damn near died. (Glass, remember.)

I glanced in the bag and saw basically about fifty or sixty of the picture above. So keeping my poker face, I asked him how much for the entire thing, saying something along the lines that the bag might be worth more than the marbles. He said $40 and I handed him $40 in cash, put the bag in my pocket and got Kris headed for the car. She looked up at me in the parking lot and said, “Got something, huh?”

We spent lunch in an old diner down the road, pulling out the marbles, all Germans from the 1800s and surprisingly in top shape, just like the ones above. And it even had some pee wee hand-mades, which are scary rare because, well, handmade and very tiny hot glass. With art inside of it.

So a fun trip to Vegas back then and how marble collectors find marbles these days.

So looking at pictures of marbles was how I spent part of my Friday night.