See no reason to stop the blog streak now. But since my focus is changing some this year because of my upcoming 70th birthday this fall, I think I will add in the exercise part of things here at times.

And maybe a little more on the writing updates. For example, I have a story to do tomorrow, two introductions to different book projects, and then two more stories to write. Then I will fire back on the Cave Creek novel and finish it. So writing is fun and jammed at the moment.

The exercise, on my schedule, was to really ramp up today, August 1st, but the office move sat that back a week or so. But today I did four miles walking, tomorrow I will do five miles (10,000 steps) and then six miles on Monday which was where I was at before the trip north.

A number of years back I topped out at 267 pounds before finally starting to turn that around. I am now down 77 pounds over the last three years, at times like a bad carnival ride, up and down. Goal is to hit 167 in the next year. Possible.

Here is a picture of me at 267 at my writing computer in my office on the coast. The painting is the original oil painting by Barkley Shaw of my first novel. (It now hangs in the entrance to our condo.) 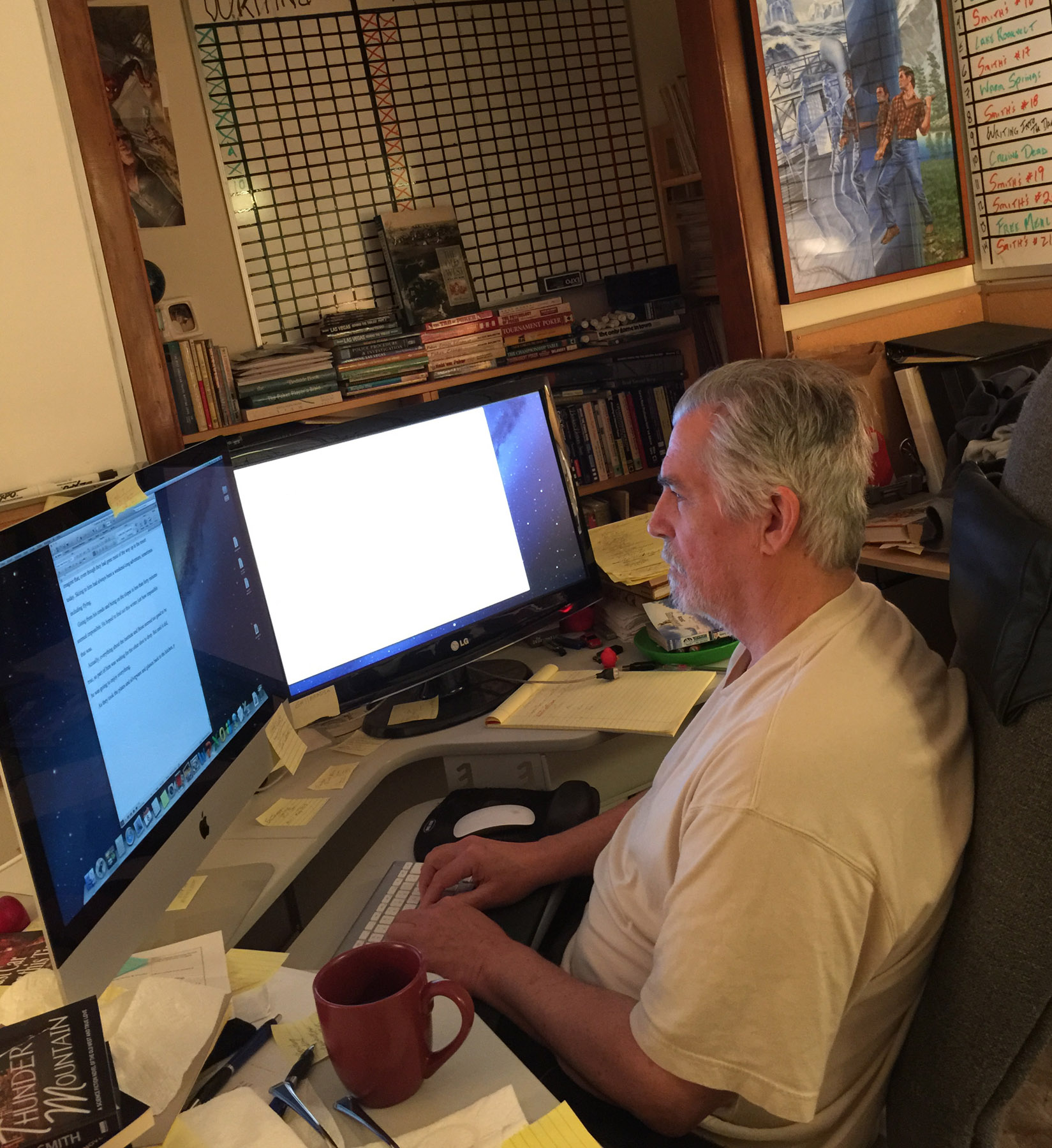 Losing weight is never a good enough goal, however, at least for me. It has to be part of something else.

So way back when I was thirty years old, I ran a marathon to drop weight after my first year of law school. I was at the 260 pounds in law school as well. So used the idea of running a marathon to force me to drop the weight, which I then put back on over the next thirty years.

So if Covid gets under control, I’m going to try for a marathon in my 70th year on the planet to drop that last 23 pounds. I ran/walked two half marathons last year.

But right now it is stupidly hot here, so no going outside, and my fear of the gyms with running tracks is keeping me away at the moment.  So I went and forced my own hand, as they say in cards.

I signed up for a local running group. The local running group meets every Sunday (at dawn staring at the end of August) and does a 12 mile course. Just under a half marathon, every Sunday. Okay, that’s nuts. But it has me motivated.  Not being the last one to finish every Sunday is a hell of a motivator for an old jock like me. So the goal is to drop eight pounds by the first Sunday and be doing at least six or seven miles a day in run/walking by then as well.

So first post of the 9th year had both some writing and exercising.

Also, don’t forget that the Diving Kickstarter is going on. It just went past its second stretch goal, so pass the word. Check it out here to get a copy of Kris’s new Diving Universe novels.