You Heard That Right…

Jody Lynn Nye is the coordinating judge, so she and Kary English will work together to get the top manuscripts to all the judges each quarter. After all the judging is done, the manuscripts will go into Writers of the Future and the names will be put back on them and I will get to work with the authors and put the book together and so on.

The folks at Galaxy Press and Author Services are maybe the nicest, friendliest, and most hard-working people I have ever had the pleasure to know. And working with them will be a fantastic pleasure. As I said, I was the first across the stage in the very first ceremony 38 years ago. To now step into the position of editor of the 39th edition and beyond is an honor new-writer me could have never imagined.

Why was I picked? Besides that fact that I have edited two incarnations of Pulphouse Fiction Magazine, and was the fiction editor of VB Tech Magazine. John Ordover and I at Pocket Books copied the idea of Writers of the Future for Star Trek: Strange New Worlds. And I was the editor of that yearly volume in that new-writer contest for ten straight years. And after I finished that, I became a judge in 2006 in Writers of the Future. So sixteen years of judging the contest and all that editing was why I got the nod.

The new writer in me is still just stunned.

A very, very sad part of all this is why the job was open. My good friend of 35 plus years, Dave Wolverton (Farland) tragically died after being the editor for most of 15 years. K.D. Wentworth, a good friend, was the editor for a time and she also tragically died far too early. And then Algis Budrys, the founding judge and driving force of the contest for the first few years is also no longer with us. AJ was my mentor and my friend. I miss all three of them and only hope to do as good a job as they did on editing the yearly anthology.

Still hard to grasp that they are all three gone.

Yes, it is still going on. Just go to WMG Teachable and hit see all courses. When you find one you want, hit purchase and then on the next page put in the code

and you will get the class or course or challenge or lifetime subscription at half price.

As I get caught up, the May regular workshops will be posted in the next few days. And maybe even three or four new classic workshops.

Be patient with me on catching up my email. I sort of had an exciting week. (grin)

Picture below of me and Kevin J. Anderson and Nina Kiriki Hoffman at the event rehearsal. Fun picture. 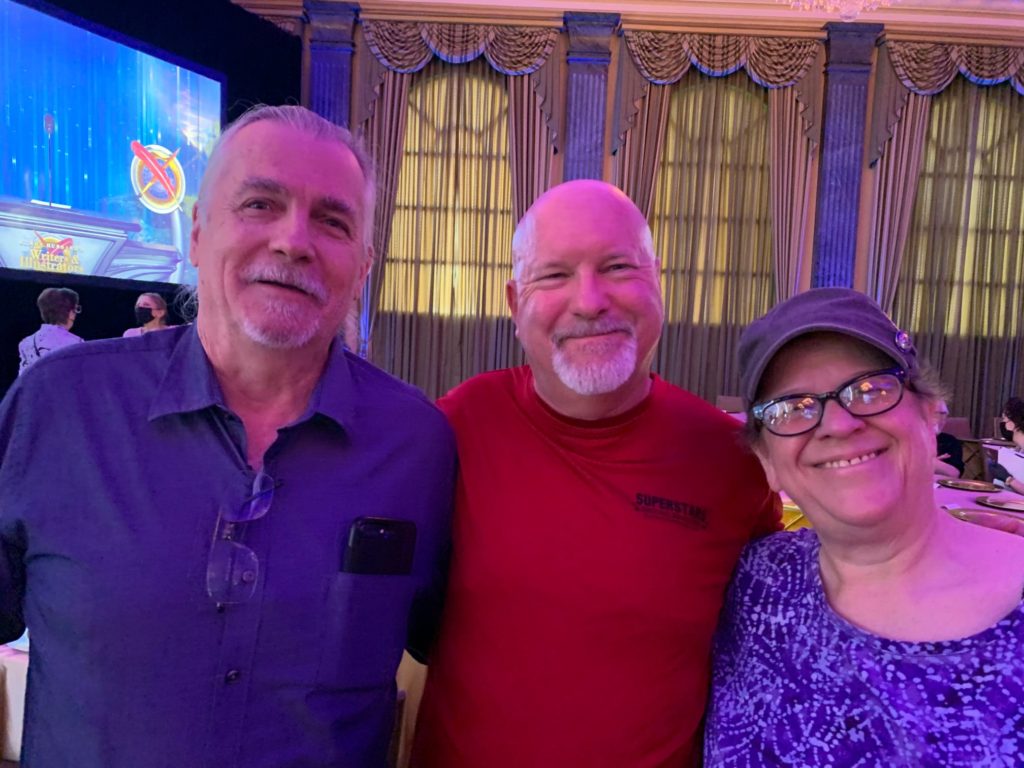