Grandmaster Jack Williamson fell in love with a story I turned into the very first quarter of Writers of the Future 37 or 38 years ago and fought to have it in the first book, even though I’m pretty sure Algis Budrys wasn’t so certain about the story. I didn’t learn what Jack had done until a party where I met Jack for the first time at Writers of the Future.

To me, Jack Williamson was a god. He had published his first short story in 1928 and published continuously since. I was afraid to say anything to him, to be honest, but my second wife, LaDene, literally pushed me up to him to introduce myself. When I did, he got all excited and said how much he loved my story and so on. I was stunned into silence.

Even though his wife had just died in a car accident, he spent a lot of time with me that evening, giving me some suggestions, talking about writing and publishing. He might have been the kindest man who ever existed in the science fiction and fantasy world. I don’t think there will ever be a close second.

I wrote him a few times over the next few years and always got a letter back. Then three years later I got to spend a week with him, same week I met Kris. He was one of the instructors for the twelve of us and again, it was an honor to be with him.

He helped me and Kris out with our new magazine Pulphouse Hardback Magazine and was always a supporter of our work. We even did a collection of his stories in our Author’s Choice Monthly series. And every time I got to spend time with him, I enjoyed it and learned something as well.

So somewhere around 15 to 20 years after I first met Jack at that very first Writers of the Future event, he invited me and Kris to a symposium on the future he sponsored in his home town in eastern New Mexico. No brainer, we went, didn’t even hesitate.

It was a wonderful three days and the picture below is of Jack in Jack’s living room with Scott Edelman, Connie Willis, me and Kris. And yes, the covers behind him are of pulp magazines he had stories in. And just a few of his awards. Most were in his office. He was still to win more awards after this picture, including a Hugo Award in his 90s.

Right after that picture was taken he invited us to go into his office. Connie made it further into the office than I did by a few feet. I barely made it a few steps into that sacred place. Kris stood in the door if I remember right.

On the way back to the airport is where we ran into exploding cows and I got caught in a stampede of Texas Longhorn cattle, but that is a story for some evening at a workshop here in Las Vegas.

Damn have I been lucky to have mentors like Jack Williamson in my life. He was one of the greats, if not the greatest. 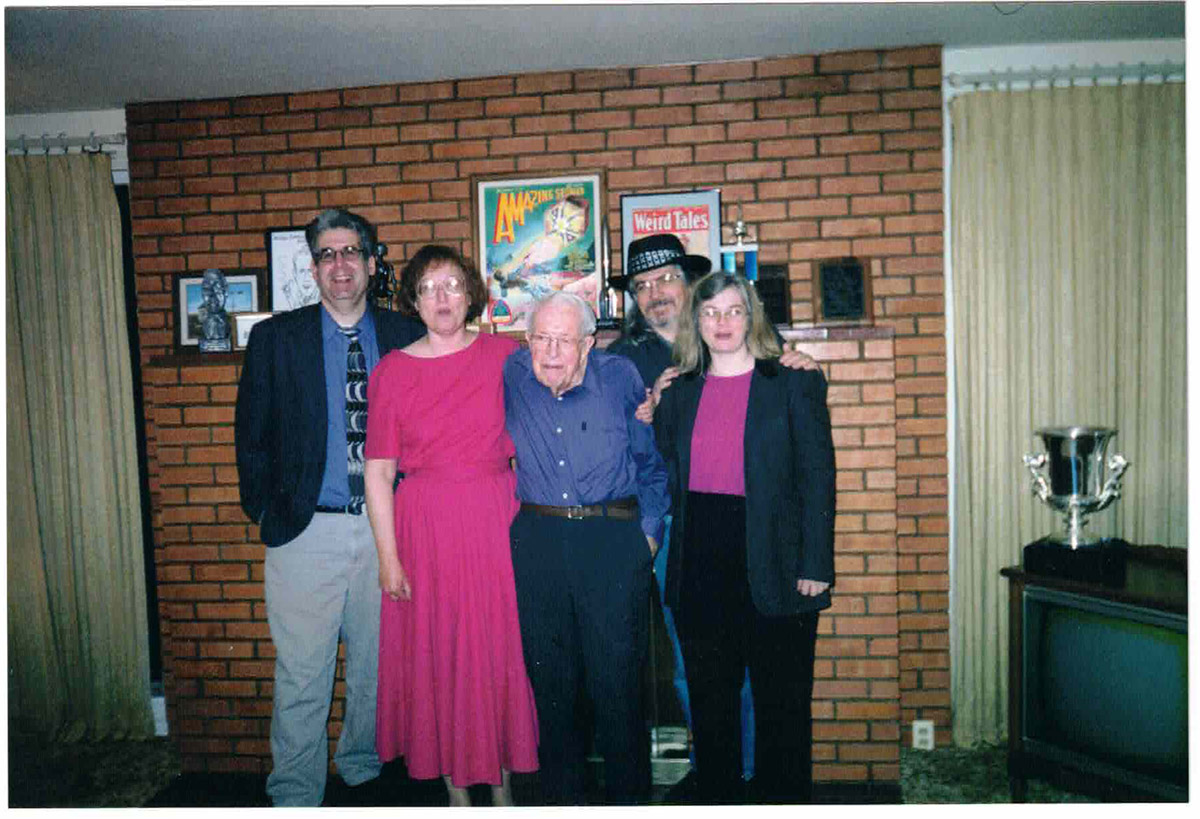