Still a ton to do, but we are in the new place!!

At the moment I am not, because I didn’t have time to put my new office together, so I am sitting in a mostly empty former business condo (#143), at a large dining room table we will give to a charity at some point, doing this and running through my email.

Tomorrow I put my office together.

Move started a little after 7 am when Kris and I rounded up the two boys from #907 in two carriers and put them in a bathroom upstairs in #1401. Then I got the little girl into her carrier and we put her with them, all locked in their carriers and closed the bathroom door.

Movers were early (typical Vegas) so a little before 8 am we started moving stuff out of #143 condo (was our business office and my office the last few months). From #143 we had to go down a long hall, through the parking garage, into the main lobby and up the cargo elevator to the top floor where #1401 is. Then, since our condo is two stories, much of the stuff had to also go up a flight of stairs inside the condo.

Finished the move after seven hours straight. Three movers and Kris on one end and me on the other.

Both older places still have a ton of books and other stuff in them, so luckily we have a month for both places to get the stuff out. More than likely we will need the movers again to get a bunch of it into a storage unit.

When we released the cats, much fear, much slinking around. When we got back from our late lunch, there was some hissing, a lot of exploring.

Now I just heard from Kris that after only six hours together Angel and Gavin are already chasing each other around with a lot of howling and hissing. Cheeps just watches as much as a blind cat can watch. We could be in trouble with this bunch.

So somehow I have managed to do another blog in this streak by setting up my computer down here. Not a chance that I would have done one if this streak wasn’t holding.

A picture of Angel exploring a new cat tree we just got for them in front of a window near our 14th floor living room. We have a living room at the top of the stairs on the 15th floor and also in our massive bedroom. (3 couches, two love seats,  and two big chairs, plus three ottomans. That’s how huge this place is. Two people and three cats. Plus two amazing offices. Kris has three desks in hers and I have three desks in mine. She has a recliner as well in hers, I have an antique architecture desk plus the desks and two office chairs in mine. Even worse we have three dining room tables and 16 dining chairs. Did I say this place was huge. (grin)) 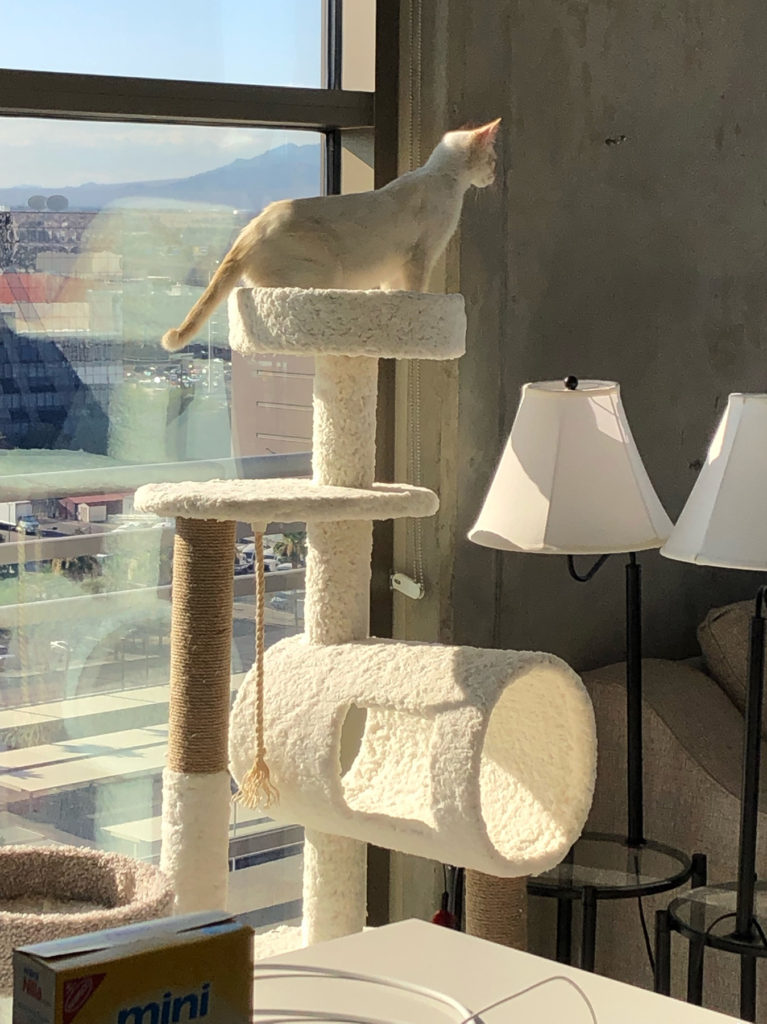