Only Available In the RESCUE TWO Kickstarter Campaign.

These both fit in well with the space opera and science fiction nature of the Seeders books. And both are going to be great fun.

NOT OFFERED ANYWHERE ELSE BUT IN THIS CAMPAIGN.

Idea fiction is an entire area of science fiction, and many writers believe that is all that makes up science fiction. They are wrong, but it is a large part of the genre.  An important part to know how to do.

Kris and I have put together this three-week class to help you understand what makes a successful idea story as well as a good science fiction story.

All sorts of details about how to generate ideas in this class (besides finding the magic post office box… science fiction joke… sorry).

This is a three-week workshop, only offered through this Kickstarter campaign. You will have your choice of taking it starting on April 12th or on May 3rd.

NOT OFFERED ANYWHERE ELSE BUT IN THIS CAMPAIGN.

Time does not work in the same fashion that it does on a planet then it does in space. A science fiction writer must make decisions about how to deal with time in any story set in space. Ignore it, deal with it in some fashion, or make it real. I can tell you this… I have written a lot of stories that deal with this topic and the surface of ideas about this topic has not been scratched.

In fact, RESCUE TWO deals with differences of time in space.

Kris and I have put together this class to help you understand what makes time in space in a story work for modern readers. How to even explain it without getting lost in the physics.

All sorts of details about how time actually works in space, and techniques on how to deal with it as a writer.

This is a three-week workshop, only offered through this Kickstarter campaign. You will have your choice of taking it starting on April 12th or on May 3rd.

You can get both special workshops under the $250 reward level, or as an add-on. In two short classes you will take your science fiction writing to another level.

And that is not counting all the World Building classes you will get without charge if you back the campaign.

Considering how much I have written about time in space opera, and how many idea stories I have written, these two workshops have me really excited and I promise Kris and I will keep them fun. 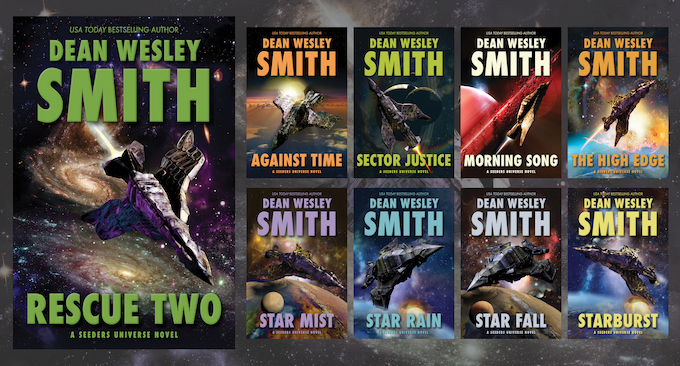