This One Is Way Cool!!

And wow, does it have some great books and science fiction authors in it. And I had the wonderful pleasure of putting it all together for StoryBundle.com

Here is what I wrote for the bundle…

Lots and Lots of Space Ships

A famous quote from the opening of maybe the most popular space opera series ever, Star Trek. And wow did I write a lot of Star Trek books. Over thirty, plus a few comics and also some scripts. I even edited for Star Trek for a time.

But before I fell in love with Star Trek back in the 1960s, I had been reading the space opera of Andre Norton and Robert Heinlein and others.

Covering vast areas of space with flashing spaceships and nifty alien races, space opera in the hands of great authors helped me time after time to get off this planet and live among the stars where life was a lot more fun than my real life.

So for me, great, classic space opera is always my favorite kind of reading still to this day.

Then in the middle 1980s, I met and married another space opera writer, Kristine Kathryn Rusch. She loves space opera as much as I do, in just about all its forms.

So this last month, when I got lucky enough to get to put together this bundle of space opera books, the very first person I turned to was Kris. (Yes, she was close, in the same house, but still, she was the first one I thought about because of her books.)

She has not one, but two major space opera series going right now. Her Diving series even had a full novel published in Asimov’s SF Magazine. And her Retrieval Artist series just published a year or so back an eight-book Anniversary Day series inside the larger series.

Also in this bundle is Kristine Smith, another major space opera writer. And for this bundle, Kristine gave me three novels, not just one. The first three books of the Jani Kilian Chronicles. And if you love the first three, which I am betting you will, there are at least two more available.

Next up, I knew Robert Jeschonek had not only written some of the most innovative Star Trek books and stories I have ever read, but he had a series he called Trek Novel that sort of spun away from classic Star Trek in a way that only Robert Jeschonek can do. Thankfully, he said yes to including his book Sticks and Stones. Folks, if you love space opera, you will fall in love with this book.

Next I went to Blaze Ward who is doing some of the most interesting space opera being published and he had available a fantastic example of his work. His book Queen Anne’s Revenge, the first book in a trilogy, features a lost scout ship behind enemy lines. What could go wrong there? A great adventure.

So then I started looking for great writers who could provide some of the basic tropes of space opera that I had not yet included.

To start off with, what would a space opera bundle be without a bounty hunter? So Michael D. Britton supplied that with his wonderful novel Dreams of a Fool. And Mason Elliot supplied a nifty strong woman in charge in space with his novel Naero’s Run. And then Meyari McFarland supplied three books that deal with generation ships. That’s right, three books.

And then rounding out the great tropes of Space Opera, Leigh Saunders supplied me with a wonderful book called Memoirs of a Synth: Gold Record, about a thief.

To finish up the needed tropes, I added in one of my books about a massive galaxy-spanning human culture that was seeded, another great trope of space opera. But in my books, the ships go past galaxies like fence posts along a road. You know, really, really fast. It is the only galaxy-spanning book in the bunch.

So I hope you enjoy reading these 13 novels and one collection of space opera. I think any lover of the genre will find a lot to love in here. I sure did.

GRAB ALL OF THEM AT STORYBUNDLE.COM/SPACE 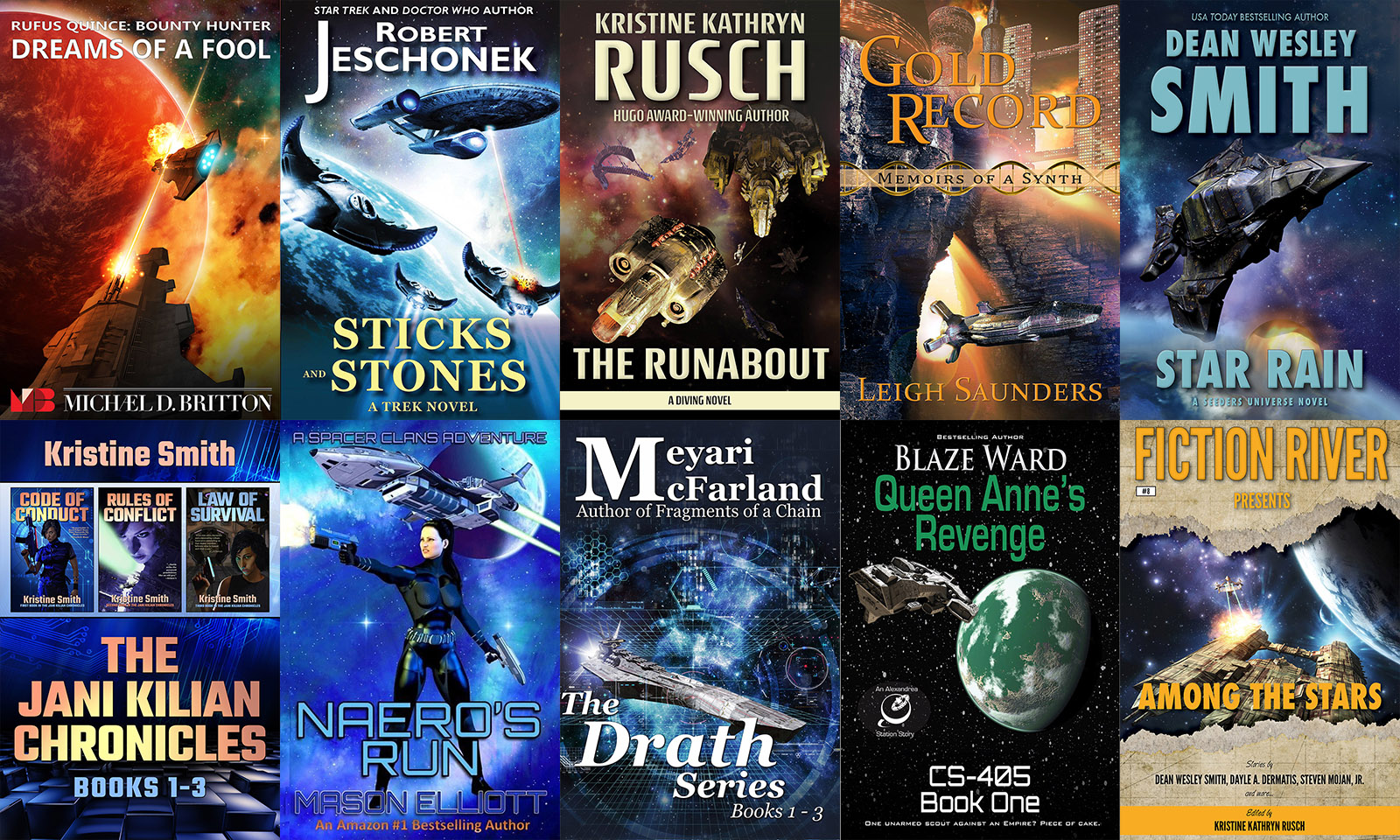