From my first moments at science fiction conventions back about 35 years ago, Jay Kay Klein was there, taking photographs. I have no idea how many thousands of pictures he took of me over the decades, but it seemed that every time I turned around there was a flash. And it never once bothered me.

Jay Kay Klein started taking photos far before I arrived on the scene and kept up taking photographs of sf authors and fans until just before his death at 80 in 2012.

He was a very, very nice person, published some decent stuff over the years as well, but was a stunning photographer. He kept his photos carefully organized until he donated them in his will to the University of California Eaton Collection of Science Fiction and Fantasy.

At this last workshop a young but talented up-and-coming sf writer handed me a stained envelope that was clearly very old. He just wanted to give it to me because he knew I would understand and appreciate it. He had inherited it.

So as I opened the envelope I almost fell down. What I was holding was the two parts of what is called Convention Annual #1 Pittcon Edition 1960. Part of the contents was 30 pages of carefully listed and numbered entries, all typed.

The second part was called Convention Annual Pittcon Edition 1960 and consisted of 191 black and white photos taken at the 18th Annual Wold Science Fiction Convention in Pittsburg in 1960.

I had never seen a copy of the thing but I had heard about it. Mike Resnick in his book about fans talks about this book and the other five that followed over the years.

Now frighteningly enough, the pictures in the book looked just like sf conventions I had gone to for thirty years. Fans and writers standing in the halls talking, sitting in suites talking, and on panels talking.

All the photos and writing were by Jay Kay Klein.  But wow, the pictures in those pages are stunning for a history buff like myself.

In his intro about the convention, Jay Kay Klein talks about some of his friends who were there, from H. Beam Piper, Bjo Trimble (before Trek she ran the art show), John Campbell, James Blish, E. E. Doc Smith, Harlan Ellison, F.M. Busby, and the list went on and on through Fred Pohl, L. Sprague de Damp, Lester del Rey, Isaac Asimov, Judy Merril, Robert Heinlein, and on and on and on.

So for fun tonight I thought I would show you just one of Jay Kay Klein’s wonderful photos from the very rare and wonderful 1960 book from the world of science fiction.

The picture is of two of my all-time favorite writers, Randall Garrett and Doc Smith. Doc is wearing the sandals. Photo by Jay Kay Klein from Convention Annual #1. 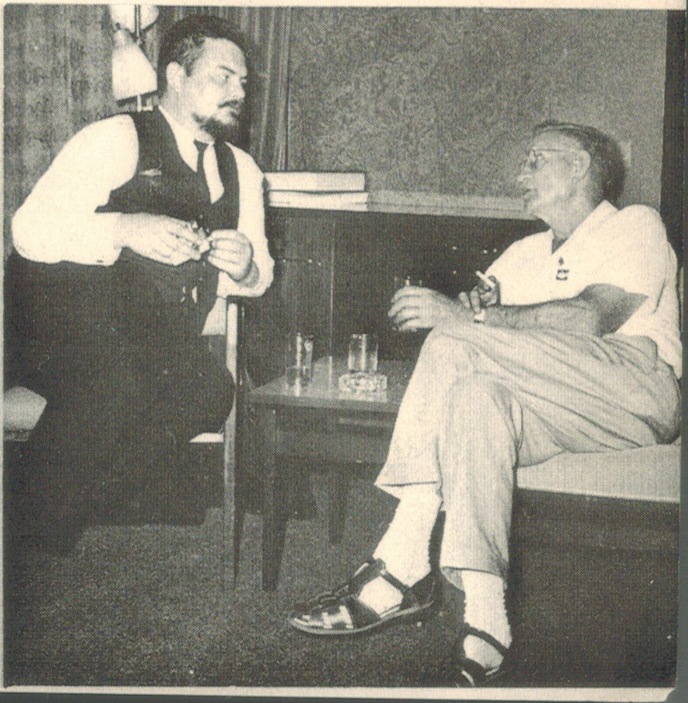 Tracking Fiction Page
Tracking Exercise Page
——–
You can support this ongoing blog at Patreon on a monthly basis. Not per post. Just click on the Patreon image. Thanks for your support.