Started off way too early this morning in a park in Henderson. Really nifty park and lots of people for a good charity cause. Kris and I decided to stay together and just walk it since the run/walk was not timed. We walked until we got over our 5K and headed for a restaurant we had not been in for going on two years. The Squeeze Inn. We used to be regulars there, but you know… Pandemic.

The manager and two of the wait staff remembered us and were shockingly excited to see us back. That was wonderful and let me tell you, it felt great to be back.

So home after a great breakfast (I had an egg-white omelet of peanut butter and bacon, with tomato slices on the side.) I took a nap since I am short three plus hours of sleep.

Then about 2:30 we headed back out for a Golden Knights 5K run. This one at what is called Sunset Park and was timed. Most of the run goes out through the desert and I saw a bunch of jackrabbits of all sizes and two road runners. I decided since I have some long runs coming up, I would push this a little. And I did just a little. Run/walked, which is what I do, but did more running than walking and had a decent time. Ten full minutes off my personal best from two years ago, but still good enough to win first place in my age category. (Got a really nifty Golden Knights thermos as a prize.)

And considering that Kris has a hurt knee she is slowly getting healed, she ran the entire way and finished about five minutes behind me. Slightly slower than her normal time as well, but both of us will take it as a second 5k distance for the day. And I love winning my age group, especially since there was some tough runners in my old-age group this time. I barely stayed ahead of one guy. He’s 81 years old and been a lifetime runner his entire life. I passed him and stayed ahead of him, but he was trying to real me in over the last mile. He said I was a a damned kid. (grin) If one of the regular runners who had been at the first race had come to the second one, I would have ended up second. I haven’t beaten him in two years and he’s 73.

Plus the weather was just stupidly beautiful. 65 degrees, sunny, no wind. Ya got to love Vegas.

And yes, I took a second nap and got my story done for the day.

Picture of Kris and her medal at the finish line. 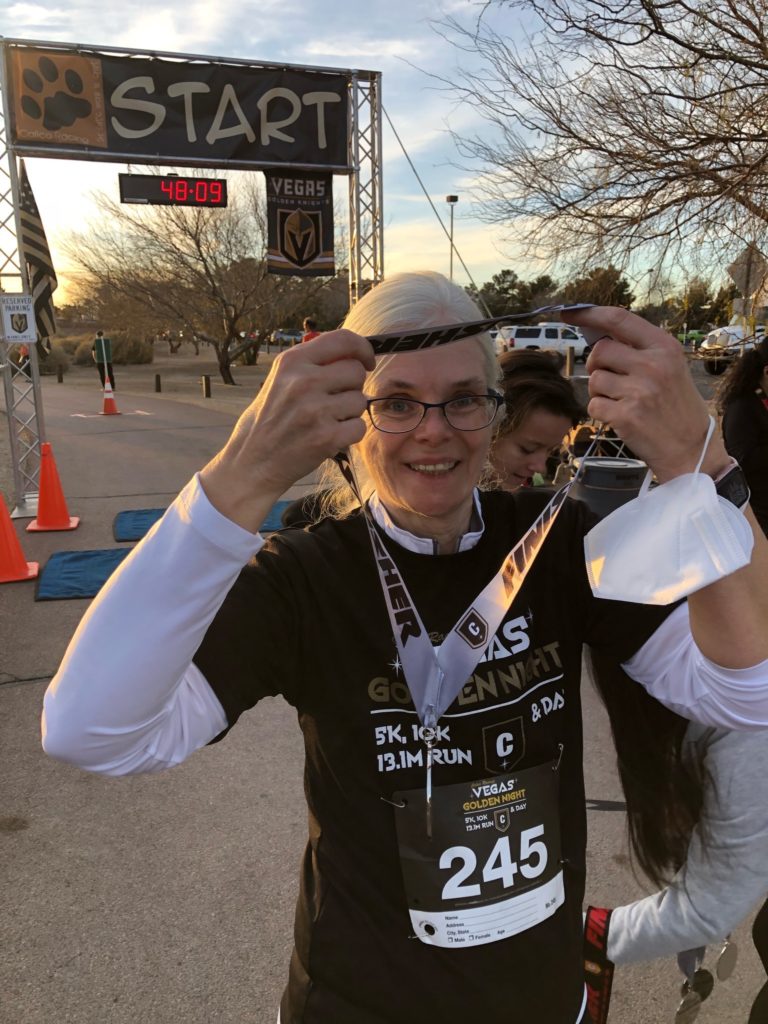