Off to WMG Publishing Northern Offices…

By the time most of you read this on Wednesday, I will be somewhere in the center of the Nevada desert, headed north.  I will stay in a nice suite hotel in Boise, then on to Lincoln City, Oregon, on the coast, on Thursday.

Then on Friday, Saturday, Sunday, and Monday all day, I will be in the WMG Publishing 7,000 square foot warehouse/office basically organizing things. This trip is organization and decisions on what I am going to be doing with a lot of things that fill that place.

We first got that warehouse nine years ago when my friend Bill died and I needed a place to put his stuff from his three bedroom home and two bedroom apartment. (He was a hoarder of valuable collectables.) Kris and I lived in a 5,000 square foot, 10-bedroom home overlooking the Pacific, but it was already full of our stuff.

I brought 27 truckloads of stuff from Bill’s place to that warehouse.

So we took the warehouse, expended it to the entire top floor almost immediately, then at one point we had two offices and another warehouse on the lower floor of the building.

WMG offices have always been in that building and in many workshops I recorded the videos from different offices in the building. WMG Publishing and its crew, including Allyson, has now moved to a very nice professional office suite a mile north. And WMG has an office down here in Vegas that will also work for in-person workshops for craft and for our licensing business under WMG.

So we have to get rid of the warehouse which also now holds a lot of stuff from Kris and my big house as well as store inventory and what is left of Bill’s stuff.

This will be my third and final major clear-out of massive collectables. I first did it from Bill’s house in Eugene. Then two years ago I did it for Kris and my big house there on the coast. Now I have to do it for the warehouse where a lot of the stuff and even more went from the first two clean-outs.

But I will not have a storage unit. It is all going by August 1st somewhere.

Many of you are familiar with this building in person. For a number of years we did big workshops in one area of the building. Every Sunday for eight years we had a writer’s meeting back near the kitchen in the building. And then we put a collectable store in three rooms of the building that lasted for four years before we shut it down a year-plus ago.

That’s what I have to clean out. Or at least start in the four days I am there this trip.

I have sold all 110,000 comics that are up there, and the half room of art cards except for uncut sheets.

I plan on bringing the science fiction and mystery digest collection down here to Vegas later in the summer for the new office here, but will be getting rid of a lot of duplicates either down here or before I haul them. And and I bringing some books and a lot of art.

But the rest has got to go somewhere because we have given August 1st notice on the warehouse, almost nine years to the day since we took it.

So I will be blogging every night here about the trip in Covid-Land and how I am being very, very careful. And also I will be putting up some stuff that needs to be sold here to see if anyone is interested. It will be collections, not individual stuff for the most part. Trust me, if I put it up here, it will be a massive deal. (grin)

The pictures of a lot of this stuff will amaze you, folks. Those who have been in the place have to be shuddering right now trying to imagine me, almost 70 years old, by myself, in that huge place, clearing it all out. The world gives me little choice and sadly almost all the stuff there is mine. I will have some help after I leave. I will sort things into piles for younger people to deal with later. But mostly I have to touch everything. And I really can’t have anyone there working with me in Covid-Land.

Stay tuned. It will be an interesting trip and even more interesting four days in the warehouse/office.

And if I get some writing done along the way, I’ll talk about that as well.

And I will be answering emails each day, no problem. Just not doing assignments until the 18th.

Don’t forget you can still sign up for the June Regular Workshops. If you come in late I’ll be glad to read your first assignment when I get back.

And the Cold Poker Gang Kickstarter is only $800 away from the third stretch goal, so pass the word. All kinds of cool stuff and I hope people will enjoy the mystery novels as well. Check it out.

SOME OLD PICTURES TO START…

This first one is my old office that was moved upstairs three years ago. All that stuff is still there upstairs and in boxes, including two poker tables and my massive marble collection, which will be coming to Vegas with me. I loved this office except it was so noisy from traffic on Hwy 101. 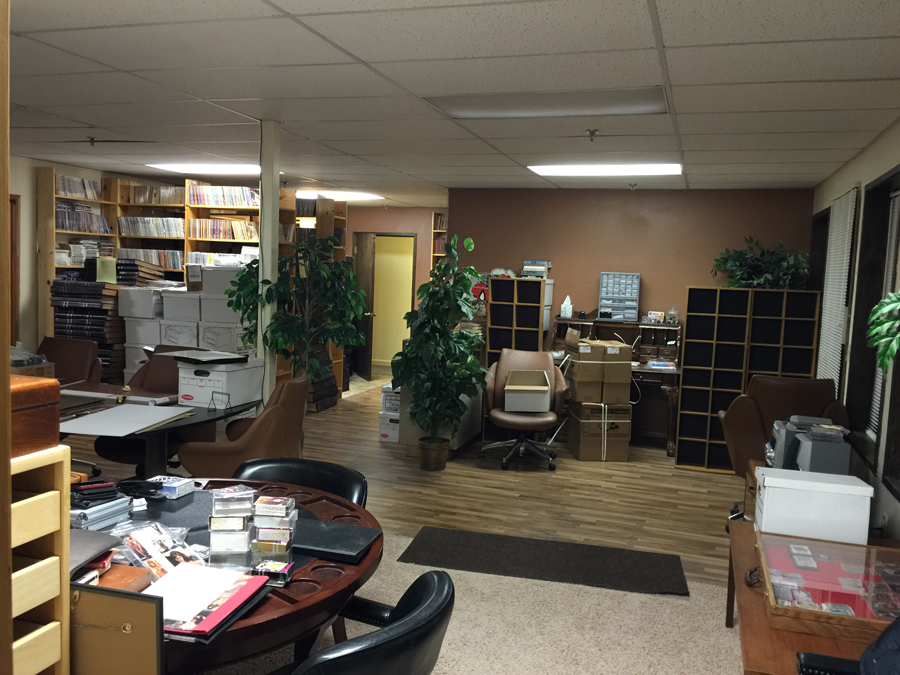 Yes, I still have all those wonderful monster movie posters. They are all original movie posters. At the moment this room is completely full of comics. When we held workshops up there, this was called the “Living Room.” Lots and lots of wonderful writing conversations in that room. 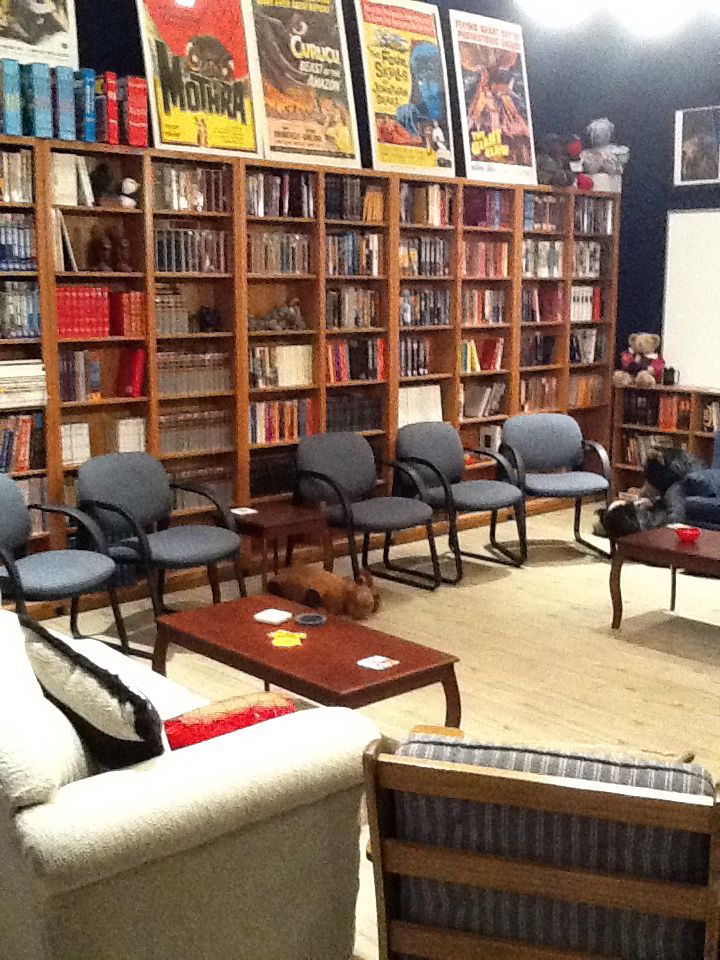 A picture out of Bill’s front room of his apartment. A lot of that stuff is still in the warehouse to this day. I will have lots of pictures all week of what the warehouse looks like now. Before and after. 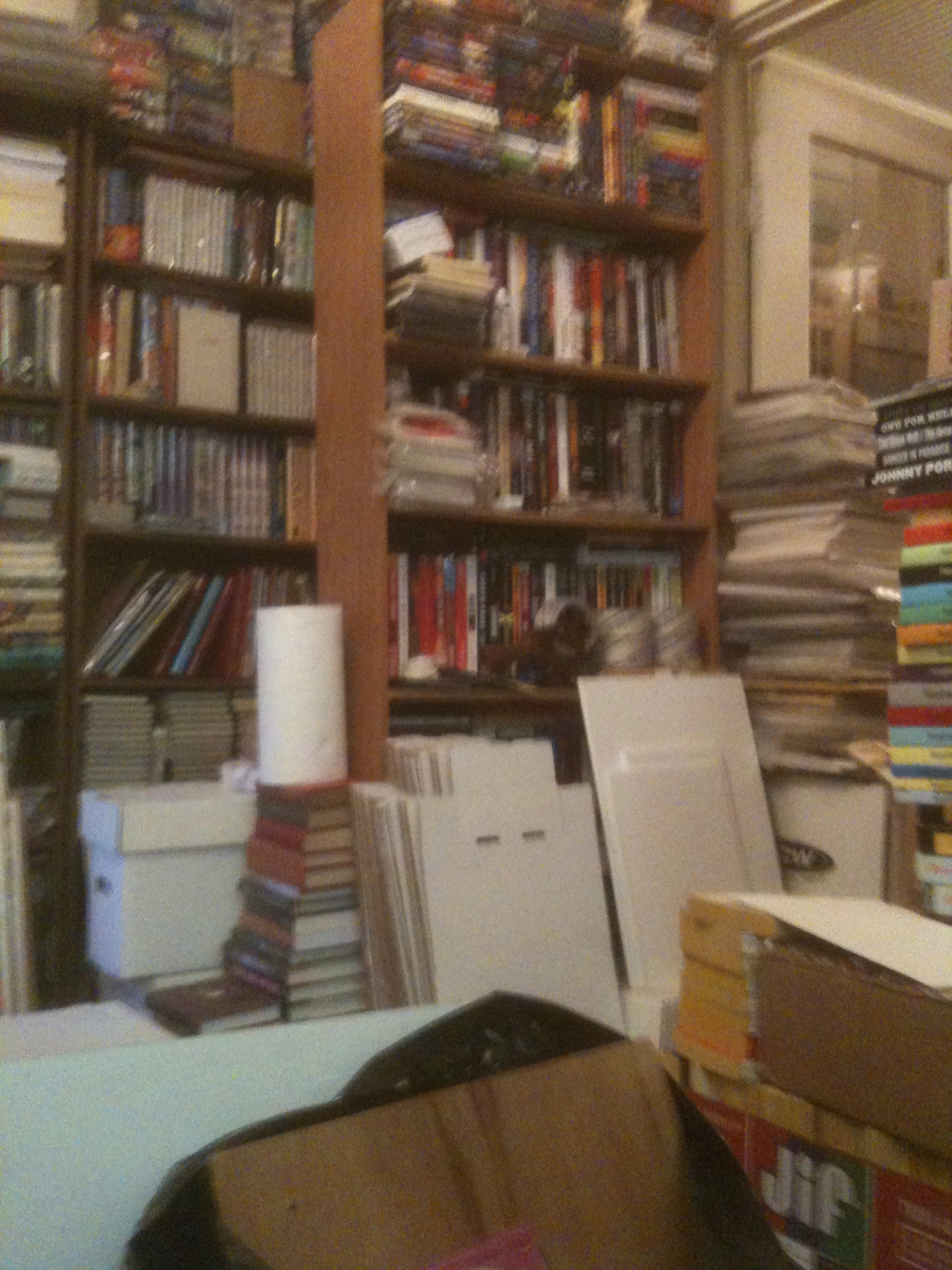