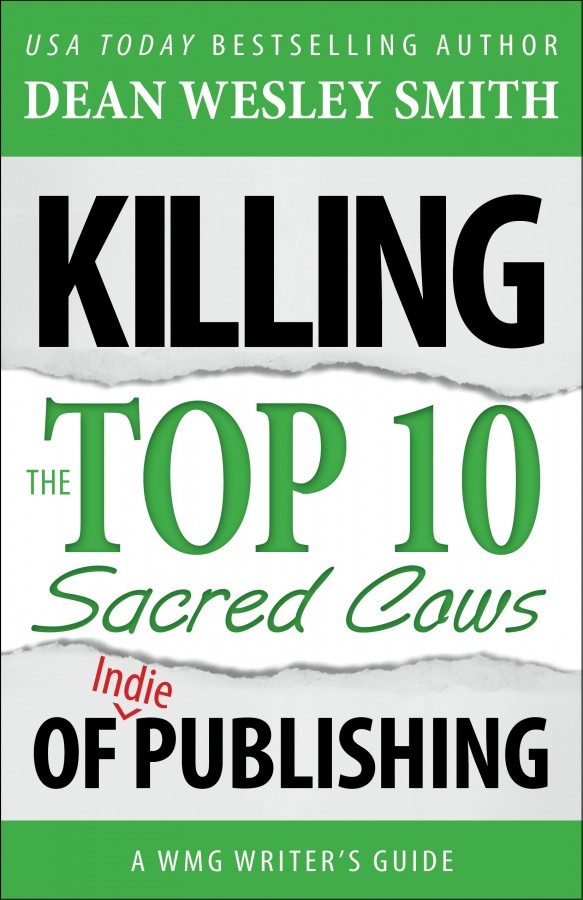 And the third biggest myth to hit indie writers is this:

No One Will Pay Good Money for an Unknown Writer’s Work. (So a new writer should make his or her work cheaper because it’s worth less.)

Thankfully, just a tiny bit of thought will kill this silliness for most people. But it is one of the most repeated myths young writers have.

Fact: Every writer started off as a new writer. (I know, shock.)

Fact: Every new writer who sold to traditional publishing for the first time in the last hundred years was paid decent, good, or fantastic money. Why? Because the gatekeepers thought they could sell a lot of copies of (you guessed it) an Unknown Writer.

Fact: A 100,000 word mystery from an Unknown Writer, when traditional publishing sells it, is priced EXACTLY at the same price as similar-sized novel from a bestselling writer. Price in old traditional publishing was based on printing and shipping costs and the size of the book and how many would fit in a sales and a bunch of other factors, including shipping cartons.

Fact:  Not once in the last one hundred years did any traditional publisher price a new writer’s book lower because the writer was unknown. (Nope, they priced it because of printing costs.)

Fact: All writers are insecure.

So in 2009 or so, here comes a workable electronic publishing that allowed writers in the door to set their own publishing businesses and thus, their own prices. And since all writers are insecure, beginning writers decided their books were worth less and thus, because they were suddenly given the control, priced their books less.

Talk about a wild and crazy time. While traditional publishers were fighting and breaking laws to not allow Amazon to lower e-book prices to $9.99 because it was shockingly too low, new indie writers were pricing their brand new novels at 99 cents because it couldn’t be any good since they were new writers.

And thus this myth got started.

A bunch of us were fighting the trend and getting kicked for it by shouting to indie publishing writers to not cheapen their own books, just price slightly less than traditional.

And since a lot of us saw electronic books replacing mass market paperbacks, our suggestions were to price novels and collections in the same price range as mass market paperbacks. $4.99 to $7.99.  Far under what New York traditional publishers thought was too low (back then and still in most cases).

But insecure writers (given price control) just won’t believe that anyone will pay a decent amount of money for their book. So the novels they spent a long time writing go into the 99 cent discount bin, the perma-free bin, or the $2.99 price.

And they always have what they think are good reasons for doing so.

Insecurity is a bitch to fight in fiction writing.

BUT NO ONE KNOWS MY NAME… (add whining here…)

Really. Go ahead, ask anyone on any street if they know my name and they will look at you puzzled. Fact: No one (but a bunch of writers who seldom buy books) knows my name either.

And they certainly didn’t know all the pen names I sold books under. Every time I sold a book under a pen name, I became a new writer. Duh.

Only difference was, I have been learning and practicing my storytelling skills for decades, so with a new name, my books still entertained people.

Since my wife has some open pen names, I’m going to mention her name here. She writes romance under the names Kristine Grayson and Kris DeLake. She writes mystery under Kristine Kathryn Rusch, Kris Rusch, and Kris Nelscott. All her science fiction is under Kristine Kathryn Rusch. With me, she wrote five media novels under Sandy Schofield. With me, she did a bunch of movie tie-in novels under the name Kathryn Wesley. And there are others.

All of those pen names won or were nominated for awards and sold thousands and thousands of copies per book.

So she was a new writer with all those names at one point or another.

AND NOT ONE OF THOSE BOOKS WAS DISCOUNTED OR SOLD CHEAPLY BECAUSE SHE WAS A NEW WRITER WITH A NAME NO ONE RECOGNIZED. Yet, she was exactly that because no one knew her pen name.

She sold all those books and started all those brand new names because she’s a great storyteller and liked to write across genres.

This person’s insecurity would not allow the complement in. Ah, well. I hit a personal button with that one I guess.

But most new writers won’t be angry at me with this. They will just not believe me because, you know, I don’t understand what they are going through. (Add sarcasm snort right here.)

As a New Writer, What Do I Do?

There are a number of things you can do, but first off, you need to understand some really basic principles of publishing.

Principle #1… Your story has to be good. I didn’t say well-written, I said you have to tell a good story. This takes years to learn, but is fun to learn. And you never get to the top of the skills of storytelling. And you, as the artist, never know when you hit on a good story or missed, so you put them all out.

Principle #2… You have to have more than a few products. When a reader, through promotion or word of mouth, finds your book and reads it and likes it, they want more instantly. If you only have one or two, they will move on and forget your name. Nature of the new world.

Principle #3… A writing profession is a long-term thing. It has always been that way, but this new world has allowed writers to get in a hurry, so many get discouraged easily without a lot of sales early on. To fight this, think in chunks of five and ten years ahead, not a week or month ahead.

So understanding those principles, what can a new writer do in this modern world?

The answer is simple… TAKE CONTROL

— So first, make it a focus to keep learning how to be a great storyteller. This can be learned in books, online, in workshops, and a thousand places in this modern world. But you have to develop a quick filter to ignore all the stuff that doesn’t make sense to you and work for you as an artist. And make this learning a focus that will never end.

— Second, make more time to sit in the writing chair and produce product. Even an extra fifteen or thirty minutes per day will do wonders. Every writer is different and every writer has different methods to get to producing fiction that readers enjoy. At first you may not be good enough to control the quality of your stories, but you can control how many hours you spend writing original words. (Rewriting and researching are not writing.)

— Third, set up your publishing press (basics are under Think Like a Publisher under the tab above), then learn to do covers, learn to do blurbs, learn to do paper books, learn how to upload your work. Even if you end up not doing it, you need to know how to do it to take control of everything.

— Fourth, start learning copyright. And read blogs and other factors about the goods and the bad of traditional publishing so you are informed if and when you are approached.

All of the above are long term and you need to plan long term. Five and ten-year chunks, remember.

For example, ask yourself this:  If you are giving over cover control to someone you hire, are you going to still want to be paying that money out in five years just because you are afraid to learn how to do your own covers? Think ahead. Learning is tough, but this is an international profession. And it can be learned.

Take everything you can under your own control. Learning, production, money, everything. Give no control away because you are afraid or lazy. That way lies disaster.

The Big Things You Need to Do

These will be the hardest two things you ever have to do in this business.

To believe in your own art, you need an ego. All successful artists have egos. We protect our work and do our best with everything we do and hold pride in our work. You have to believe in yourself and your own ability to keep learning to stand any chance at all in this business.

And there will be those around you and online who have a huge desire to pull you down. Ignore them, ignore reviews, do your own work from your own heart.

And that especially means don’t discount your books unless for a special sale. For example, for twenty days, people can buy one of my books right now, as I write this, for less than $1.00 electronically because it’s combined in a book bundle with other novels. But on all the major sites, it’s still priced as a standard novel at $6.99.

You must learn how to be patient with sales. If you use sales as a self-worth measuring stick, you are turning over to others something you can’t control. And the moment you turn over to others your own self-worth, you are doomed. Write and put books and stories up for only you. The fact that some people buy them, fantastic.

And yes, if you keep doing that, at some point you will make your entire living off of what you enjoy doing. It is very possible and likely if you believe in your own art and keep producing new work and learning.

But it’s not easy. Nothing about what I have said here is easy.

Every professional writer started off as a new writer. All of us took years and years to get to making a living. But the one thing we all had in common right from the start?

We all believed in our own work, protected it, and never undervalued it in any fashion.