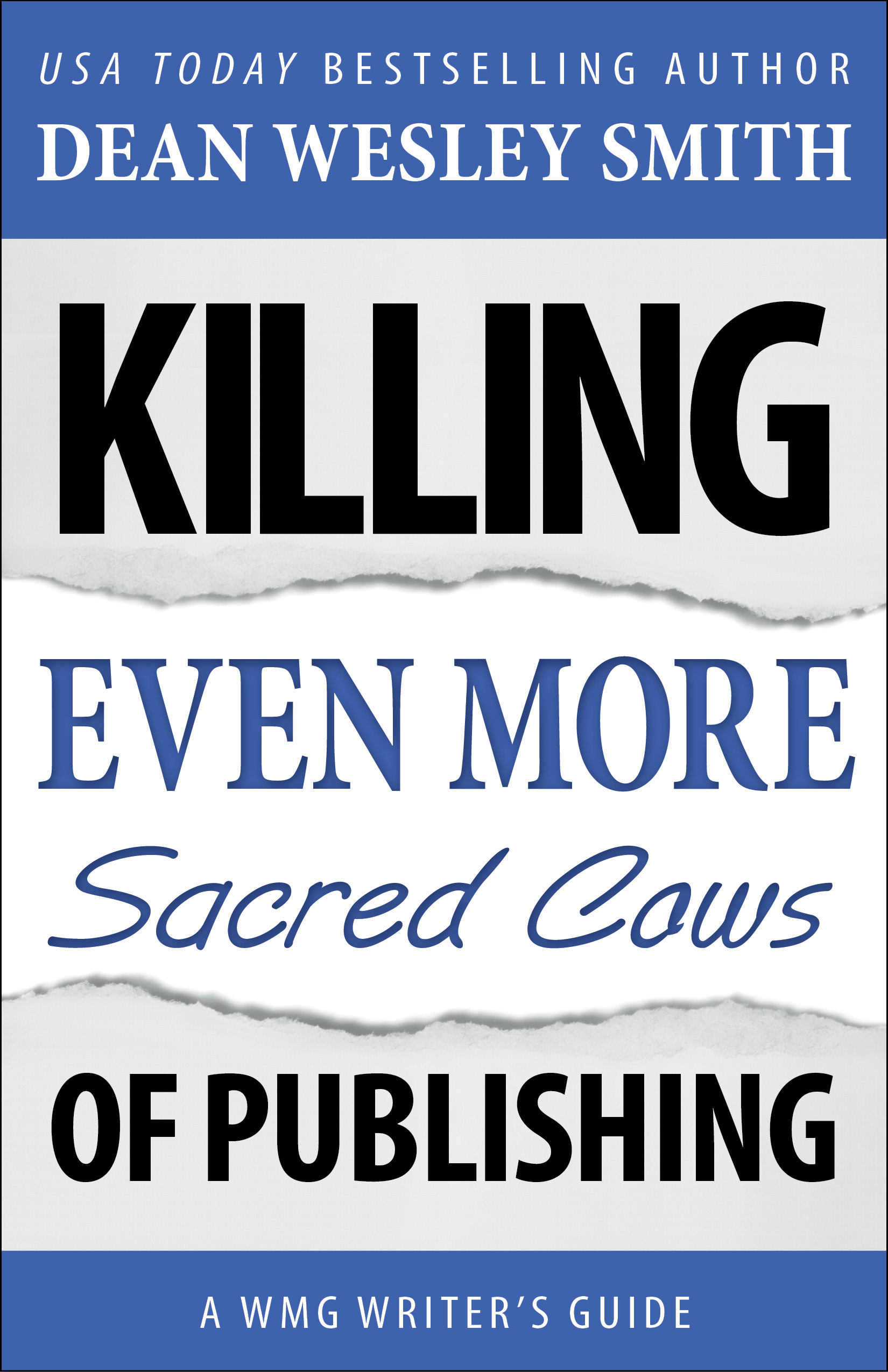 Book three in this series.

Both books are available everywhere in electronic, paper, and audio.

And Myth #1 in this book is under that tab as well.

Myth #2: Getting a Critique from a Workshop is a Good Way to Learn Writing.

This is so wrong and dangerous to new writers, it scares me to death. Yet over the last few decades this has become a major accepted and believed myth. So let me see if I can make a small dent with my little sword from the back of my donkey on this one.

Workshops, in their modern form, started back in the 1930s, mostly credited to the Iowa Writer’s Workshops which started in the mid-1930s. And this form of critical critique held true for decades, pushed by university programs where instructors believed that learning how to tear a story apart helped a writer learn how to construct a story.

The constructing a story part was mostly dropped along the way and the critical part came to the front. Being critical is so much easier to talk about then trying to figure out how to actually construct something. Anyone with a hammer can tear down a building. Very few people can build fine construction.

Many, many writers decided to copy the basic format of critical workshops for smaller meeting groups as time went on, with the 1960s starting the explosion of these things, especially in university programs.

In the science fiction genre, for example, a conference called Milford was started by Damon Knight. It was the standard everyone attending critique a submitted manuscript, looking to be more and more clever in how they could tear the story apart.

Damon Knight and Robin Scott Wilson started the Clarion workshops for beginners in this same form in the late 1960s. And the writers attending there went home after six weeks of daily critique and started their own workshops.

By the 1980s, this form of critique by peer groups had become standard. And since then it has stopped more thousands of great writers than I care to think about.

I came out of this kind of workshop, actually. I helped start a peer critique workshop among a bunch of beginning writers in 1982. And then in 1987, Kris and I started yet another one in Eugene. And for a time here at the coast we ran some as well.

But during all that time I was bothered by the writers who turned in a story to try to get it “fixed” and find out how to “polish” it for submission.

And Kris and I had to constantly badger people to say positive things about a story they were tearing apart.

In all those workshop years, I never once turned in a story to a workshop that wasn’t already in the mail to an editor. I  turned in a story for audience reaction, not to fix something. Many of you who have read my blog know how I feel about going back and fixing a story instead of writing a new one.

And when those people who wanted to change my commas on page ten learned I was never going to touch the story or use their precious advice, they always got angry at me. I would just shrug.

So I used peer workshops and others to learn, but not on my own story, but from networking with other writers and listening to other people’s ideas about story in general.

To be honest, I am not sure why I had that attitude from day one in the very first workshop. I think it was the seven years I had lost rewriting everything to dust that caused me to not want to even think rewriting ever again.  I was following rule #3 of Heinlein’s Rules. Period.

So I used workshops to learn in audience reaction to a type of story and networking. And that has served me well for years now.

THE DANGER OF A CRITIQUE

Losing faith and belief in your own writing skills can be destructive at best, deadly to your writing at worst.

Having a dozen people beat on your story, ALL LOOKING FOR WHAT IS WRONG, is destructive. It is impossible to learn about your own writing from that situation. That’s not how our minds work in writing and in learning how to write.

When having negativity coming at you, it is impossible to hear or learn. The brain just shuts down.

I will wager that a lot of people reading this article, this chapter, will admit to being stopped by the peer workshop process.

And I will wager a few younger professionals will say it helped them. A workshop here and there can help at times, but not because of the pounding your story will take, but because of networking and general learning.

I can see no reason for an artist to submit his or her work to a purposeful beating week after week.

1… Turns up the critical voice. Gives it more reasons to stop you.

3… Hurts your own belief system and you start doubting yourself.

5… Often you end up writing for the others in a workshop instead of yourself.

6… If you are stupid enough to turn in a work-in-progress, you can be stopped cold.

7… Fixing a workshopped manuscript is writing by committee and I have seldom seen that work.

Writers learn in the same way as all artists learn.

First, we soak in information into the front of our minds, the critical thinking part of our minds. We feed that process from every direction, and long-term writers are people who developed a hunger for knowledge and learning and that never stopped.

Second, we write a lot. We give our subconscious the ability to practice what we have learned. We focus on producing the next story, the next project, because it might be in the next project that the learning will come out through our fingers.

Third, we always move forward to the next story or novel. Only if some publishing things comes up (such as looking over copyedits) are we forced to look back. Forward, always forward.

Having one of your stories looked at by a professional writer or an editor once-in-a-while can be a learning experience. Of that, I have no doubt. And maybe humbling.

But the myth that you can go to a weekly critique peer workshop and learn by having your stories beat on by others is false and deadly.

You need to pick and choose how you learn. Carefully. Find what works for you.

We do an anthology workshop here on the coast. We don’t allow the writers attending to ever talk about the stories. Ever. Not even at dinners. But seven professional editors working to buy stories do talk about them. And mostly we talk about how good a story was. And we talk about our tastes as editors. And we say why we are buying or not buying.

I listened to 250 plus stories be talked about like that over the last week and I learned a bunch from my fellow editors. But I doubt the writers learned anything from any critique of their own stories. They learned from listening to others.

There is a vast danger in the myth of learning through distraction.  The ongoing pounding you take at the hands of a weekly or even monthly peer workshop can be deadly. Especially if you have a thin skin or are prone to not have much confidence.

And even if you think you can handle it, you are just training your critical voice to be more and more powerful, and eventually that will stop you cold and you won’t even know why. (You can usually tell because everything you try to write you believe is bad, so what’s the point?)

A Suggestion for a Way to Learn

If you want to set up a gathering, a “workshop,” don’t make it a writing critique workshop. Make it a networking workshop. Move to this new century.

Meet regularly. Each week or every other week do things like the following.

— Bring publishing news and talk about it.

— Set writing goals and make the group meeting a deadline and report the progress. (Don’t show manuscripts ever.)

— Support group for when things go south, when you are stuck, when you just need to talk about something in the writing. (No brainstorming of ideas, however.)

— Have a different writing book to study each meeting and have people read it and go over it. (I have been in groups where we spent a lot of time on the Zuckerman book alone.) Discussions about these sorts of things are learning experiences.

And so on and so on… you get the idea.

(Oh, wait, we do that here in two forms. Our Sunday lunches and our monthly Friday business meetings.)

Keep your writing to yourself and your readers.

Don’t allow anyone to tear down your writing. Ever.

Trust your own creative voice while at the same time keep learning and practicing.

And remember to keep having fun with the writing and publishing. That really is the key.