As I said in every post so far, I’m going to have one post per day here for the “ghost” novel writing process that I was hired by a New York publisher to do. I am now aiming for 9 to 10 days to finish this novel. I can give ZERO hints about the content of the book, so please don’t ask. I am only talking about the writing process and my day around the writing process.

I will add to this post at different times during the day right up until I head to bed so you can follow the process.  At the end of each post I will add up the daily word count and project word count. You want to see what a professional writer’s day is like, I’ll put a post up here every day until this book is done.

If you are new to this, I would scroll back and start reading from Day 1 and read the comments under all the days so far. There is a ton of answers to questions. And the questions have been great. Thanks, everyone!

I’m about halfway to my hoped-for-and-contracted-word-count of 70,000 words. Seemingly right on schedule for my ten day pace. So we shall see how the next half of this goes.

As far as the plot, I still have NO IDEA at all where this is heading. But I am having fun writing it. I know that bothers many people who fear writing into the dark, but at the moment it’s great fun for me. The characters are just moving forward and occasionally I get to the end of a chapter or scene and know what needs to be in the next chapter. But that’s it. I hope in a few days to have some idea how this will end. I’ll let you know when that happens. Or if I get stuck.

Now off into the second half of the novel and Day 6.

3:30 PM… Rolled out of bed at 1:30 today and got to the internet computer around 2:15 with my breakfast bars. It’s a stunningly beautiful day here today, with the ocean a little rough from a light wind. Last night as I was writing I was sneezing like crazy, driving poor old Walter White Kitty nuts. I’d sneeze and he’d yell at me. Not sure what he was saying, but I know where the sneezing was coming from. I had my office window open and the wind was out of the east, something it rarely is here, so all the crap from the Portland valley was blowing over this way. I must be allergic to something growing over there. Thankfully, today the wind is shifting back off the ocean so there is clean air again like we are used to here.

I had a ton of e-mail and workshop stuff to answer this morning, so it’s now 3:30 PM and I’m headed to the writing computer for a session before heading out to WMG offices and the mail. Later…

4:15 PM… I wrote about 500 words, then realized I was running late and jumped out of here to head for the post office. I then stopped by WMG Publishing and went down and talked to the fine folks at Ella Distribution for a few short minutes, then grabbed some Burger King and came home.

5:00 PM while eating I heard a noise outside and opened the door to find a long-haired gray cat spooked off the porch and under the car. So I got him/her some food and it came right back up to eat. Clearly hungry. We thought it a neighbor’s cat the first few times we saw it, but now we’re not so sure anymore. It is thin and too hungry to be a neighbor’s cat. We just hadn’t seen it much. So now it looks like I’ll be trapping and talking in another cat. Sigh…

5:45 PM finally got back to the writing computer after answering a few more e-mails. I got another 1,100 words in.  It’s now 6:45 and I’m going to head back to another thirty minute writing session before heading down to the media room for a nap with the Waltese Falcon, as Kris calls him.

8:00 PM… I got back up here and started into the homework on the Ideas workshop, working my way slowly through that and then recording the response video for the week. I was finished with that about 10:00. Some great stuff in those assignments, fun reading.

10:00 PM… Finished the workshop homework for the night, answered a few e-mail, and then came in and told me her new blog was done, so I went out to the kitchen and read that. It’s a great one, about taking chances. She’s talking this week about something we do so normally around here it’s like breathing, but most writers don’t. In fact, the myths I’ve been pounding at here in all these comments are about writers afraid to try something new or something they believe “won’t work for me.” Anyway, it’s a great column and it will be up tomorrow morning like normal (Thursday) on her site, so read it, folks.

10:30 PM… headed back to my writing computer as soon as I get a cup of tea.  Not sure how far in I am today. I think I’m past a couple thousand words, not great, but considering the day, not bad. I’ll add it up later.

11:45 PM… I was taking a short break and Kris sent me a picture she had of Walter, so here it is… Back later with a writing update… 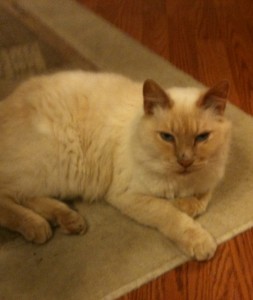 1:45 AM… Not a clue how much I have done, but it doesn’t feel like enough. For some reason really tired tonight.  I haven’t lost the will to live yet, but there is no doubt I am dragging on this book at the moment.

Might have something to do with the fact that I still don’t have a clue where this thing is going. Or that I ended up doing far too many other things today, including just spending an hour plus watching television instead of writing.

So now I’m going to go back to my writing computer and do what I tell other writers to do: Write the next line.  I’ll be back later with the end of the day numbers and such.

4:15 AM… I’m giving up, even though I have a hunch I could go farther tonight and do another session, another 800 words. I just flat don’t feel like it, so headed for the basement to watch some really bad television, then go to bed.

Somehow in the last few hours I managed to write another 2,500 words or so, so the day ended up better than I had expected when I added it all up. I had over 2,000 words done before I went for a nap, dinner, and then did the homework for the online workshop. And it seems I did another 2,500 or so words before going down to watch some television earlier.

Then I managed another 2500 or so in the last few sessions, with five minute breaks and doing about 800 or so words per session. So maybe this is picking up speed a little. If I can get a fairly clear day on Thursday, Friday, and Saturday, I still might finish this in nine days. Again, we shall see because I still don’t know where it’s going. But I am getting there at a decent and pretty consistent clip. (grin)

And that, folks, is how you write a short novel in 6 days.

You ever wonder how writers like Lester Dent (Doc Savage), Max Brand, and other pulp writers and mystery writers in the fifties and sixties did it, that was how. Take one day off and start again. Four short novels a month. And I taught workshops and did a bunch of other stuff at the same time. And got full night’s sleep every night.

Now onward to a novel of 70,000 words because that what this stupid contract says and I still don’t have a climax, let alone an ending. But I will. I will.

I trust the process.