I know the world (because of really bad reporting) believes that Nevada was late locking down, but actually the governor shut all casinos and restaurants and developed the phrase “Stay Home for Nevada” about three weeks ago. Actually a few days ahead of when San Fransisco shut down.

And a week later he put teeth in the order and started yanking business licenses that refused to close and arrested a few nut cases. He just finally had to call it by the official name five days ago to get national news reporters from spreading the rumor that Las Vegas was open for business.

The Strip is a ghost town, Fremont Street is walled off and empty. And a lot of businesses have put up plywood over their doors and windows and then the city has hired some great artists to paint the plywood coverings and when they are taken down they will be sold for charity. So out walking you can find some amazing art.

So we have been shut down now for long enough to start to get used to this craziness.

And I am used to my sanitizing routines when I go out grocery shopping. I wear gloves and a light coat, have a bottle of sanitizing spray in my car, soak the gloves every time, and wipe down the entire front area of the car. And getting the bags of groceries inside is another operation. My thin gloves by the time I am done are soaked in sanitizer. Nothing could live on those babies.

So today, after some business that needed to be done, I headed out around 12:30 to get some deserts for Kris from a vegan desert place, some other deserts from another vegan place, then two grocery stores.

The first place the door was locked, I was instructed to call by a sign on the door and they brought the bag to the door. Second place they had a special counter for take-out set up. I didn’t get within fifteen feet of the woman working there.

First grocery store was still a disaster area (same as last week), with half the shelves empty. I got some basics, then headed to the next store less than a mile away where all shelves were stocked completely (except too late in the afternoon for paper products.) Got dinner stuff there. Great meats, great fresh veggies.

Both stores had a small army of young people wiping down and spray sanitizing carts before any of us were allowed to touch one. And both stores had sanitary wipes every fifty feet. And marks on the floors so that when waiting in line you had to be a good eight feet from the person in front of you. That was being enforced by security guards.

And clerks were wearing gloves and behind big plexiglass screens.

About half the people in the store were wearing masks. Got a hunch by my next trip out that will go up to most.

Also, a point of interest. Almost every major casino on the Strip except for the MGM Grand casinos, are paying the employees full pay for the entire time of the shut down.

So by the time I got done with all that, it was almost 5 pm. Did some more business to wrap up the week, then did some email, then took a nap and cooked dinner and watched part of a show.

Back in here by 8 pm and did some more work on this web site. Going to work on it a little bit every day until I have it up to date as much as possible. That will take a month or so at least, if I stay consistent.

Then out for a walk with Kris (missed my step goal today) and then watched the last Five-0 (great team scene at the end). Set up for two more series if they want.

Then the nightly news, then in here to finally get to go back to Cave Creek just before midnight. About another thousand words or so (forgot to count) before coming to write this.

So with luck, business stuff will be slow this weekend so I can work on reading more Pulphouse Messed Up stories (responses on those will be going out shortly) and then get back to reading challenge stories and writing Card Sharp Silver for more than an hour a day.

That would be nice.

And don’t forget the Cat’s Bundle on Storybundle.com/cats 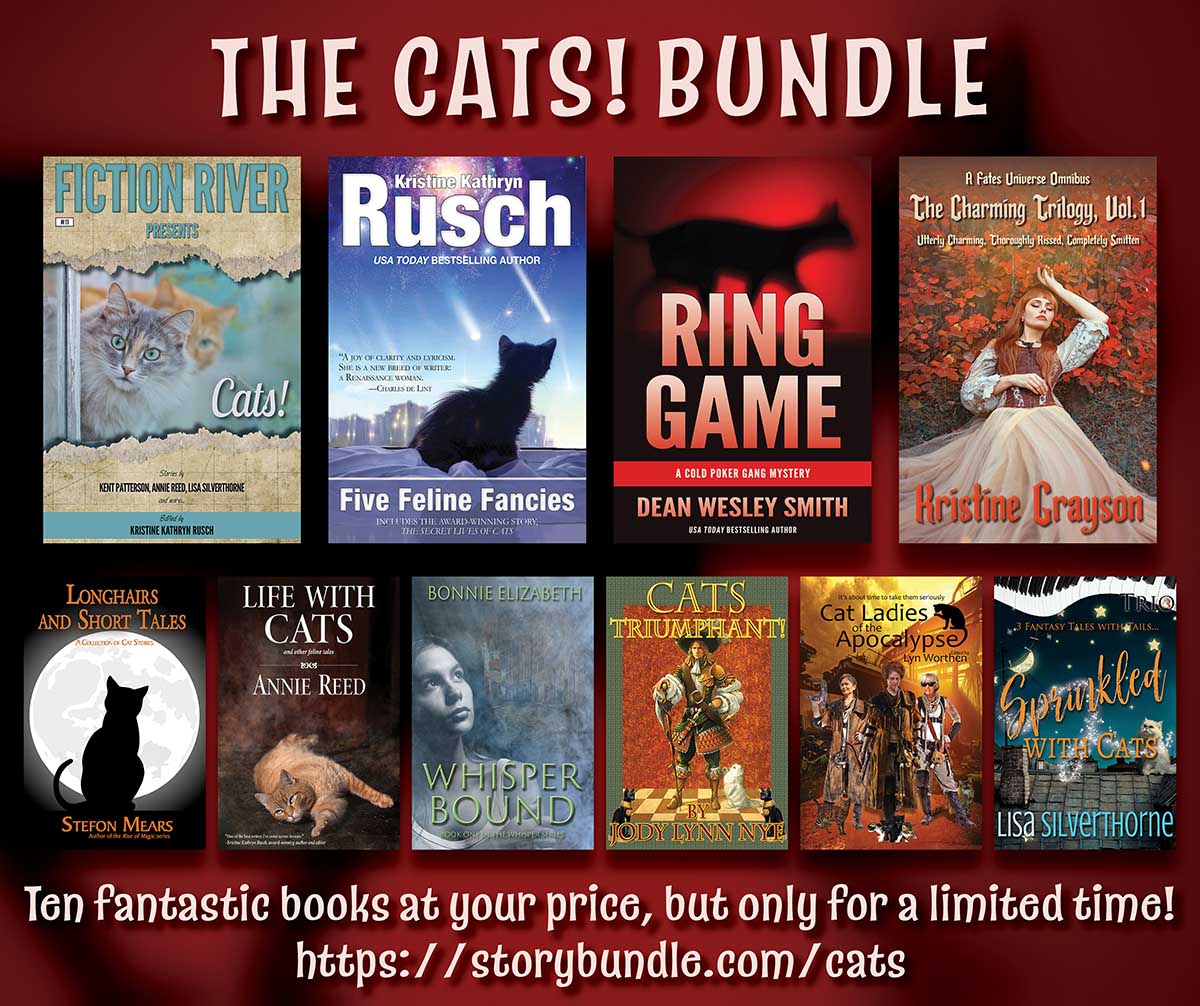