(Almost done with this short book. One more chapter after this. Patreon supporters, you will get the full book sent to you when it is all done. Please note: This is advanced reader copy. This has not been proofed. That will be taken care of when I turn in the final book to WMG Publishing.) 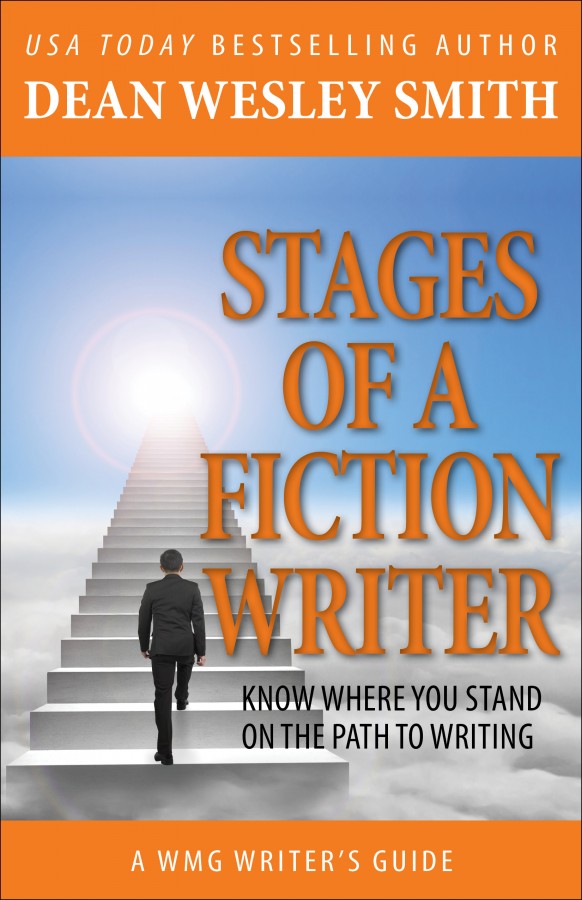 Stage four in writing is hard, at best, to describe because for most writers, it is a level of craft that is impossible to see.

So how do you move through stage three and get to stage four writing?

Mostly, the answer boils down to one simple thing: Read.

Then when you find a book that you really, really enjoyed, go back and study it until you understand what the writer did to hold you in the book, what made you enjoy the book besides the subject.

Study at different times all aspects of the book.

— Understand the many, many, many different types of cliffhangers the author used.

— Understand the pacing of the scenes, the characters, the setting. (Yes, setting has pacing.)

— Understand the character voice, the cadence, the syntax, the pacing and choices of words and character tags.

You do all this after you read a book and really, really love it.

Read for pleasure, then study.

Stage four writers are writers who have been producing for twenty or more years and who are bestsellers and write more than one book every few years.

Grisham is a great writer to study. You can see what he has done in his books and he is easy to study.

Koontz is a hard study because he’s so subtle. But he, more than any other writer working today besides King, is a master of more techniques than you or I can ever imagine. So study him. His Odd Thomas books are great ones to study.

The list of stage four writers to study goes on and on.

Some bestsellers are not to your taste. Granted.

But if you think that a long-term bestseller such as Cussler can’t write, and you are stage two or early stage three writer, you need to catch a very large clue.

And if you think Patterson can’t write (when he writes alone), you need your writing mind examined.

Granted, long-term, major-selling stage four writers might not be to your taste. But they know what they are doing and you could learn from them if you open your mind.

There is a reason that hundreds of thousands of people buy every book a major bestseller puts out year after year for decade after decade. Figure out what that reason (actually it is a thousand writing skill reasons) is if you really want to get to stage four.

And there are many stage four writers who fly under the radar for most people. Many, many, many of us, actually.

Another prime example is my wife, Kristine Kathryn Rusch.

Both would be worth your time to study. Those two write what they want and often the subject matter they tackle is not a subject that has a lot of readers. They don’t care. They write what they love and both have been major bestsellers for decades and both have won more awards than I can imagine. (And I see those awards stacked all over my wife’s office and learning against shelves and waiting to be framed and so on.)

In mystery, there are numbers and numbers of writers who are stage four and most students would not think to study them.

Or study John D. McDonald’s Travis McGee series. You’ll have to reread those many times to start seeing the real genius of McDonald in those books.

Same guidelines on who to study applies to romance and westerns and so on.

So read for pleasure, study to advance your own art after enjoying a book.

Never study during a first read, unless a book is not to your taste subject-wise. For example, Daniele Steele is not to my taste, but I have purposely studied numbers of her books to really understand what she does and to learn.

Some Problem Areas Common in Stage Three Writers to Cure

Stage four writers are in control of their readers. Any reader in any walk of life or age or country.

Stage three writers are often writers who haven’t learned even the basics of doing that.

Stage three writers often use fake details and thus lose control over their readers. Fake details comes from stage one and stage two when writers think they need to add in setting, so they type it in instead of running the setting through the opinions and emotions of a character.

Example I use all the time in classes is the word “barn.” A total fake detail because without emotions and descriptions through a character, every reader imagines a barn from his or her own past. And trust me, not all barns look the same.

The word “tree” is another commonly used fake detail. Example… He walked among the trees.

Check in with the image that appeared in your mind when I wrote that. It will be different for every reader.

But what I meant was… He walked among the short Noble fir trees, brushing his hands over their tops gently, enjoying the silk feel of their needles and the thick smell of rich fir, knowing that in six months most of these tree would be gone, decorated with bulbs and lights in homes around the country and he would have enough money to barely live for yet another year.

Yeah, trees is a fake detail unless you run it through the senses and emotions of a character.

Learning how to do that is a step toward stage four.

Pacing is an area of writing that is impossible to see until you reach a level of skill that allows the mind to understand just the lower levels of the skill and art of pacing.

Lower levels of pacing are often used, without knowing, by stage three writers.

Hitting the return key, understanding that content drives the look of the manuscript, the length of the sentences, the size of the paragraphs. Many stage three writers work into this knowledge in the later areas of stage three.

But there is so much more to pacing than just knowing where to put a period and when to hit a return key. Those basics must be learned first, granted. But let me give you an example of a higher level, stage four level, of pacing.

This one area is easy to see, but impossible to implement at first.

How to see this one area of pacing: Go to an airport, park yourself off to one side in a chair looking at a busy hallway. The best place is just outside a security area as people are moving from the ticket counter to security.

Now with only pacing in mind, watch the people.

A woman chicken-steps past in high heals.

Often phone or ticket in hand.

Next a man in jeans, a jacket, and tennis shoes strides past, seemingly without a care in the world.

His gait looks long, his shoes make no sounds, his eyes up and looking ahead.

He wears a backpack and seems to be in no hurry at all, a smile on his face as he enjoys the walk like a day in the park.

Behind the strider comes a man in a fairly cheap, off-the-rack business suit.

Too much cologne drifts behind him like a toxic cloud.

He walks with purpose, his stride medium. His cheap (but polished) shoes make a thumping sound in the hallway.

His tie pulled up tight against his neck. His coat buttoned to prescription.

His phone against the side of his head.

He acts like the phone call signals the end of the world.

Characters have pacing, just as scenes, chapters, setting, and dialog have pacing.

This must all be learned and then come out of the creative voice.

And I’m not even going to try to explain things like story voice, story tone, genre tone, and so on into meta-details. You’ll get there if you read for pleasure and then go study.

The Key and a Focus Point To Move Forward

Stage four is about control.

Just as I used the stage four poker players as an example of how they try to control what others think they have, stage four writers are complete mind-control artists.

Stage four writers make sure that no matter what question in a story a reader has, it is answered at the right moment.

So to start working through stage three and toward stage four, start focusing on control.

Learn the basics of pacing, learn depth and how to control readers with your openings, learn how to relay details through emotions and setting.

— One, read for pleasure, then study books you have read for the learning.

— Learn business as you go because all stage four writers know the publishing business. You might get to stage four writing levels, but it will do you no good in this new world if you are also not a stage four business person.

And no, there is no business in this book. This is a craft book. I just wanted to make sure to mention that right here because it is that critical.

Stage four writers are balanced in all their writing skill sets and in their business.

And they are in control of all of it.

Takes time and a lot of practice, but you can get there.
——–