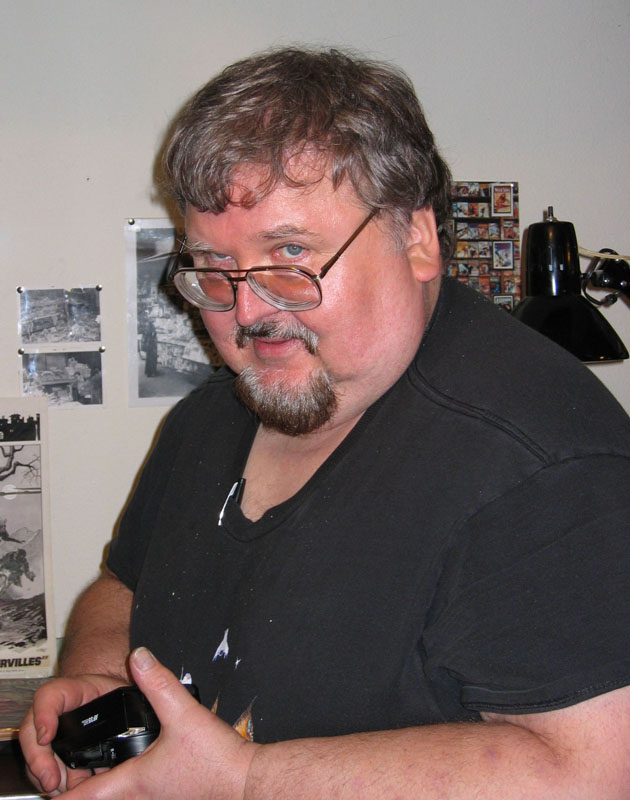 As most of you have heard, one of my best friends, book dealer Bill Trojan passed away on the last day of the World Science Fiction Convention in Reno. Kris and I had already left Reno, so we didn’t get the news until early on Monday morning.

Shocked, yes. Surprised, no. For the last six years I had expected the day to come.

Actually, so had Bill.

For decades Bill was a book dealer at both mystery and science fiction conventions on weekends while working full-time as a computer programmer for Lane County in Eugene, Oregon. He retired in 2001 and was 63 years old when he died. (Thanks to John Locke for the great picture of Bill. I can’t begin to tell you how many times Bill looked at me with that look.)

Some are working on a party in honor of Bill this fall at a convention. I will announce it here when it is set up. There will be no service. Bill hated those and except for attending Damon Knight’s memorial, never went to them. He was very clear on that.

I first met Bill in 1984 when my first professionally-published story came out in a book called The Clarion Awards edited by Damon Knight. Bill had the books on his table at Norwescon and I walked up to his table and asked if he would like me to sign my story in the book. He looked at me and said, “Why would I want some neo-pro defacing my books?”

I think I said something like “F**k you.” And walked off.

That’s how I met one of my best friends and the man I talked to every day for the last six years straight.

When Kris and I moved to Eugene in 1986, we ended up becoming friends with Bill. We quickly learned that Bill had a gruff exterior at times that could irritate a monk, but inside he had a heart of gold.

When we started Pulphouse Publishing in 1987, Bill was the silent but important backer behind the company. I spent a lot of time at his house talking about the business of publishing, about books, and about money. Bill was a major financial backer of Pulphouse Publishing as well and when Pulphouse became a corporation he had a seat on the board of directors.

After Pulphouse, Bill pushed me to get back to writing and pushed Kris and I to start using what we had learned in Pulphouse to teach other writers. Behind the scenes he was a major supporter of writers and small publishers, but hated to have that knowledge get out.

And he called me a neo-pro until I published my tenth novel, then he acknowledged I was no longer a beginner and would stay around. He had that same standard for all writers because as a book dealer he had seen so many writers come and go over the decades, he didn’t call them real professionals until their tenth novel. But at the same time he went out of his way behind the scenes to help young writers.

When we started the workshops here and, of course, lost money, Bill stepped in a numbers of times to help out, paying for some workshop fees, and refusing to take any credit or even want to be acknowledged. Well, Bill, you’ve left us, so you can’t get mad at me now for telling the truth. So there.

The real truth of the matter: All the writers who have been through these workshops here on the coast and learned from Kris and my experience owe a huge thanks to Bill Trojan. There would have been no Pulphouse Publishing without Bill and no workshops either.

Around Eugene, Bill also had a soft heart for those in trouble. Just a few months ago he helped a young person who was homeless into an apartment, paid the deposit, and guaranteed the rent. And a large chunk of his money in his bank accounts is going to a homeless shelter in Eugene once I get his will all settled through the courts.

Bill had a will. For decades we couldn’t talk him into doing one, then two events happened a number of years back. Lance Casebeer died and his estate was auctioned off and Bill hated that. And number two, Bill had a stroke.

From the time I met Bill until the late 1990s, Bill gained a good hundred pounds plus and then about eight years ago became a diabetic. He refused to control it, even though he tested it twice a day. The stroke six years ago caused a number of things to happen.

First, he got a will and named me as executor.

His will determined how his books and money in his bank accounts would be dealt with. Bill was not a rich man, but he did have some money, a paid-off house, and a lot of books, much left over from his bookstore. Since I was his executor, he left me a few notes to do certain things with certain stuff of his. I will do my best to follow his wishes over the next few months.

The second thing that happened was that Bill and I talked every day.

We both hated the idea that since he lived alone he might end up on his floor not able to move for days. So we set up our check-in system where we talked every day. If I couldn’t reach him, I was to make the two hour drive to Eugene at once. On some days he would call me and say, “I’m not dead yet.” And then hang up. On other days we would talk for an hour or more about one thing or another.

I am going to really miss those phone calls.

Bill had no family at all. No children, no brothers or sisters, no nephews, no one. He had been married once and still hated his ex to the day he died because of what she did to him. I have very clear and funny instructions on how I am to tell her about his death.

Bill was a brilliant man with a masters degree in psychology. And he knew everyone it seemed in the older world of publishing. Some hated him, some loved him.

—Larry Woodside often traveled with him to ComicCon and the two of them often fought over art or pulp magazines.

—Dennis Hooker who owns a sports card and comic book shop about a block from where Bill lived took Bill’s many package deliveries and ran favors for Bill when one of the people Bill was helping needed something.

—Rob Preston, collector extraordinaire often opened his home to the group and talked pulps and comics and books with Bill.

The other night all five of us sat at Rob’s house talking about Bill and drinking home brew to his memory. Bill was the glue that held the group together. Now it’s the strong memory of Bill that will keep us in contact.

The five of us get different parts of Bill’s vast collection as Bill wanted and expressed in his will and in private instructions he told to me over the many phone calls.

So Bill succeeded in not having any auction of his stuff as happened to Lance Casebeer. Many of his varied collections are staying together completely. And that would make him happy.

Bill died on the last day of the World Science Fiction Convention in Reno, NV, from a massive heart attack, which was basically caused by the uncontrolled health issues. He was happy and had a great convention. It is the way he would have wanted to leave us.

But damn it, Trojan, none of your good friends wanted you to leave just yet.

You helped so many thousands of people behind the scenes, pissed off many others, and leave a huge hole in the world.