A while back Joe Konrath (in one of his very interesting blogs) suggested that maybe indie publishers should not put prices on their POD books. And he seemed to have a logical argument for his position as Joe often does.

My first reaction to that suggestion was negative, I have to admit. But then I decided to give it a harder look and just not jump to a sudden judgment. I wanted to see if Joe’s idea had merit in this new world of publishing.

Also, since everything is changing so much these days, I was willing to look to see if this part of publishing was changing as well.

So I have spent the time since that post by Joe thinking it over, talking with indie bookstore owners, and also looking up some history to make sure I had things straight.

Interestingly enough, back in the 1800s, some books had prices and some didn’t. The ones that did tended to be for the masses, while the literary novels of their time done in leather hardbacks didn’t. (I imagine the thinking went that if you had to ask the price, you couldn’t afford it.)

This is the world of the “dime novels” and “penny dreadfuls.”  Wonderful stuff. I have a bunch of both in my collection.

As the pulp magazines took over into the early part of the 1900s, the price on the covers continued in the same fashion, with some exceptions. Books that publishers thought might have a large audience had a price, for the most part. All pulps had prices, often either a dime or a quarter. Most contained full novels and short fiction and some articles.

Then in the late 1930s the mass market paperback was introduced, of course with a price on the cover. And from there all books in that form had prices. It was during the early 1950s that almost all publishers also started putting prices on hardback books, with very, very few exceptions.

So for sixty years all books have had prices on them. It’s standard and the other evening as I was sorting out collectable paperbacks from the more standard stuff, I was using price as the first indicator.

Four to be exact, so not really a survey of any sort. I asked four bookstore owners their thoughts on buying books that didn’t have cover prices on them.

All four were very put off by the idea. In other words, all four hated it, which made me stop even bothering to call more store owners to talk about the idea.

One said, (and I quote) “If some lazy publisher thinks I’m going to look at an invoice and do stickers for all his books, he can keep them.”

When I asked a couple of the owners about ease in discounting the books without a price, both wondered how their customers were even going to know if the book was discounted or not without a cover price originally on the book to compare the discounted price to. (Actually, someone else in one conversation asked the question and the bookstore owner agreed.)

I found that the most compelling statement any of them said, to be honest. How do you discount when you have no “first” price to discount from?

One store owner just laughed at the suggestion, shook his head, and said that was the worst idea he had ever heard. And then changed the subject. (Indie bookstore owners are not ones to pull punches. Remember, my friend who died in August was an indie bookstore owner as well and he was one of the most blunt people I have ever met. I wish I could have asked him as well, but I’m pretty sure he would have given me that “Bill look” that I got from him with really strange or stupid comments or ideas.)

I even talked with a used bookstore owner and since he prices all his books off the original price, taking into account condition and rarity, he didn’t like the idea either.

When Joe Konrath suggested the idea, my first reaction was that it was a really, really bad idea.

Numbers of people asked me what I thought of the idea right after Joe’s blog and I told them I was thinking about it, but didn’t like it. 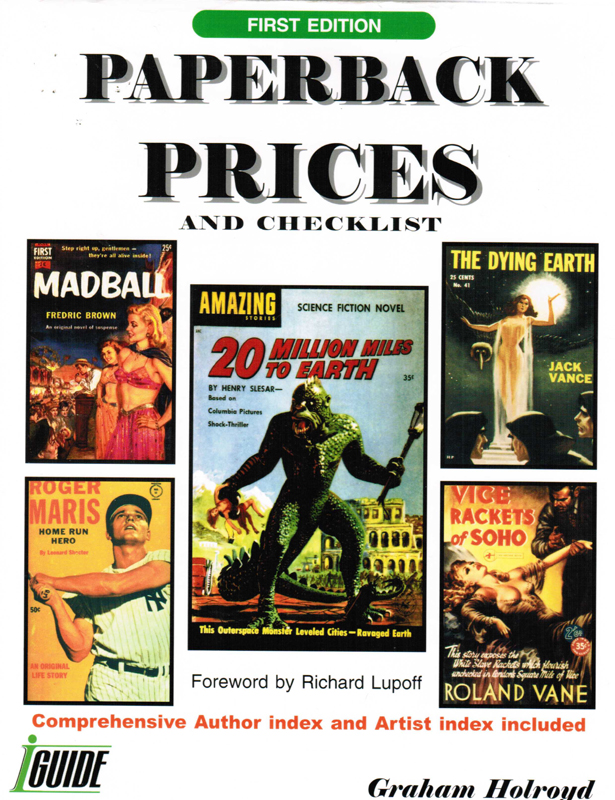 Well, now I have thought about it, talked with a few friends about it, tried to talk with a few store owners about it, and I still hold my original position. And my position was firmed up by looking back at the history of prices on paper books.

I think that NOT putting a price on a paper book is a really, really bad idea. Period.

In other words, put the price on the back of the book, down near the bar code.

Not putting a price on your paper book flies in the face of sixty-plus years of publishing and it’s a battle not worth fighting with everything else going on right now, even if it was a good idea, which I do not think it is. That detail of publishing is not changing. At least not at the moment.

Books are not like cereal on a grocery store shelf. Books are priced. If you don’t price your book, you will make indie store owners mad, make discounting a paper book almost impossible to be of value, and just label your book as an indie press book.

In this area, do what all publishers do and price your paper books.

And that is my opinion. Now go back to writing.